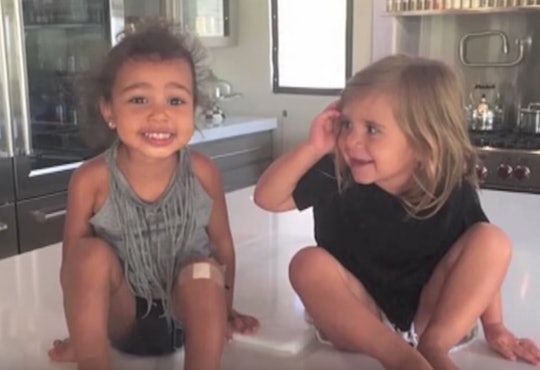 What is it about slime videos that drives kids wild? From their soothing sounds to their fun colors, slime videos can somehow distract children for hours and also end up making their parents drive to the craft store so they can create some slime of their own. Penelope Disick, daughter of Kourtney Kardashian, is not immune to this trend, trying it out for herself on Saturday. But even if you've had enough of the slime videos, Penelope Disick's slime tutorial still might be the cutest thing you'll see this week.

Slime videos are one of the newest crazes to sweep the internet, with people of all ages making their own colored slime and sharing videos of them poking it, pulling it, and folding it. For some reason, these videos are hypnotizing for everyone, including celebrity children.

On the same day as Penelope's 5th birthday, Kardashian shared two videos to her Instagram account featuring the little girl teaching her mom's 58.2 million followers how to make their own slime. "Hi guys!" Penelope says excitedly in the first video. "So we are going to make slime today! Lets get all our ingredients." In the next video, Penelope is seen with all of the ingredients for slime out in front of her. As she names them one by one, she pauses, making a face at the camera and asking, "So what ingredient do we need first?"

OK, she didn't exactly get it right, but Penelope's short slime "tutorial" was definitely an adorable success in plenty of other ways, let's be honest.

So maybe Penelope doesn't have a future in making and selling slime like some crafty entrepreneurs out there. But she does have plenty of time to learn and perfect her tutorials — she did just turn 5 years old, after all.

And even if the slime tutorial didn't go exactly as she might have hoped, Penelope's birthday was definitely a success. On the same day of the slime tutorial, Penelope had what appeared to be the most amazing birthday bash of the year. On Saturday, the 5-year-old celebrated her birthday with family and friends in Kardashian's backyard with a surprise musical appearance from family friend Will Smith and his son Jaden Smith. This birthday bash comes on the heels of another Moana themed birthday party she shared with cousin North West, complete with characters from the movie and a pig petting zoo. (Both of these parties looked and sounded better than all of my birthdays combined.)

So, sure. While her adorable slime tutorial might not have gone as planned, it ended on a painfully cute note — and even if it hadn't, Penelope still has plenty to celebrate.