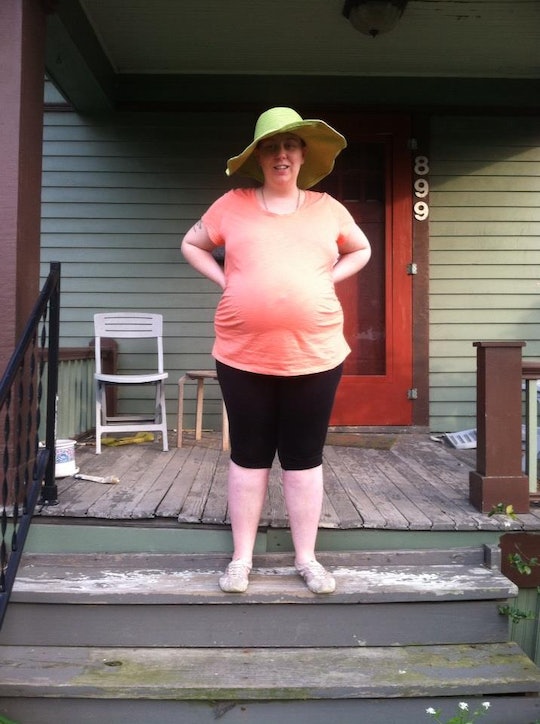 I love birth stories, to the point that, long before I had my kid, I was one of those weird wannabe mamas who would actually just read birth stories for fun. When I became pregnant, I was excited about it for all of the obvious reasons, one of which was the idea that I would now have a birth story of my very own. Well, now I do have my own labor and birth story, and it’s nothing at all like what I expected.

Nothing about my birth was standard, and it ended up being the longest (and most confusing) labor my midwife had ever attended, as she later told me. I’m proud of the work that I did to bring my child into this world, but there’s one thing that still hurts, even though the birth itself was over a long time ago. Because I felt like I was in labor for such a long time, people love to ask me whether it was “real” labor or not.

I went into labor in the early hours of a Monday morning, but my son wasn’t born that day. My son was born, by cesarean section, at 8:04 p.m. on a Sunday evening. When I tell people that, they gasp. Which makes sense! It’s gasp-worthy! This is very basic math, and that is almost a week! After all, the average active labor is 4 to 6 hours long, so the fact that I feel my labor lasted almost a week might strike some as gasp-worthy.

At that point, I usually clarify that the labor stopped sometime early Thursday morning, and didn’t start up again until just after midnight on Saturday. This is not unheard of: A person can be in active labor that stalls or stops entirely, sometimes for hours on end. (This is called a "stalled" labor.) Mine is also not the longest labor on record: that honor belongs to Polish woman Joanna Krzystonek, who gave birth to twins after lying upside down for nearly 75 days.

Nonetheless, when I tell people that I was in labor for nearly 120 hours, I hear a number of insulting, hurtful, and thoughtless reactions.

It is incredibly painful to have my birth and labor experience constantly interrogated. It's like being told over and over again that what happened to me must not count, or didn't actually happen, or was somehow a figment of my imagination.

“So, it wasn’t real labor until Saturday, then?”

“I mean how can you know whether or not it was real?”

“Oh yeah, I had false labor too, it was the worst!”

While the people who ask these questions don’t mean to be hurtful or cruel, the fact is that it is incredibly painful to have my birth and labor experience constantly interrogated. It's like being told over and over again that what happened to me must not count, or didn't actually happen, or was somehow a figment of my imagination. Essentially, it's other people telling me that I am not qualified to define my own birth experience.

To be fair, I can't say with utmost certainty when I started officially going into "active" labor and when it stopped, because the line between “real” labor and what we term “false labor” (or prodromal labor) is often somewhat fuzzy. Prodromal labor typically consists of contractions that don't present with any of the other signs of active labor, such as a dilated cervix. They're more painful and consistent than Braxton-Hicks contractions, which tend to be painless and more infrequent.

Prior to Monday morning, I had been having Braxton-Hicks contractions on and off for weeks. I woke up in the wee hours of Monday morning, and suddenly the contractions had completely changed. My midwife said she thought it was the real deal, but it was still early yet and she had no idea how long it would be until the baby arrived.

After laboring through Monday, Tuesday, and most of Wednesday, we headed to the hospital. On Thursday morning, my contractions stopped completely, and they didn't start again until my water finally broke around midnight on Saturday. By Sunday morning, I was exhausted. We headed back to the hospital, and I got an epidural. That evening, my son was finally born.

Why do we, as a society, care more about whether or not a woman’s birth experience is valid or not than we do about supporting her?

Because doctors define labor according to very rigid terms, such as how how dilated your cervix is, it's certainly possible I wasn't officially in labor for as long as I thought I was. But labor itself can be unpredictable and incredibly hard to define. It can vary in length, it can change quickly, and the birthing person's perception of labor is often much different than a doctor's perception. In fact, according to a 2009 study, which polled new mothers and midwives, there was a sizable time difference between what women identified as the onset of labor and what midwives identified as the onset of labor.

All of which is to say that when you're actually in labor, it doesn't really matter how dilated your cervix is or whether you've had your "bloody show" or any of the other traditional indicators of labor. What matters is how you're feeling at the time, and whether you're getting the care that you need. As my midwife told me in the car on the way to the hospital, "the only real difference between false labor and real labor is that one produces a baby at the end."

Because I was not under the care of a doctor throughout my entire labor, technically, I'll probably never know whether mine was a case of extremely convincing false labor, or active labor that stopped and then started up again. But does that really matter? Why is it that when a woman tells you how long she labored for, your first question is about whether or not her experience "counts"? Why do we, as a society, care more about whether or not a woman’s birth experience is valid or not than we do about supporting her?

As soon as I went into labor that Monday morning, my experience changed drastically. I was no longer a pregnant woman having occasional contractions. I was transported to another world, where nothing mattered except getting my child out of my body safely.

The fact is that as soon as I felt my body experiencing painful contractions, I was no longer a pregnant woman experiencing occasional discomfort and on the lookout for labor. I was transported to another world, where nothing mattered except getting my child out of my body safely. I was in more pain than I had ever been in in my entire life. I heard weird animal sounds come out of my own mouth. I felt terrified and excited and brave and calm all at the same time. It was like nothing else in the world and it changed me forever, and that remains true regardless of how my experience is defined.

To this day, I still experience symptoms of post-traumatic stress disorder (PTSD) related to my long labor. (This is also, apparently, not uncommon: one study has estimated that nearly 17 percent of new moms experience symptoms of postpartum PTSD as a result of having difficult or traumatic births.) In fact, I have flashbacks that prompt me to momentarily believe I’m in labor all over again. It is incredibly painful and traumatizing to be told, over and over again, that the thing that caused these flashbacks wasn’t “real,” and therefore wasn't such a big deal.

The people who ask whether or not my labor was "real" also never seem to be satisfied with a simple answer. I cannot just say "yes" and leave it at that. They want additional information. This can quickly turn into prying for incredibly personal details. I have been asked everything from, "Well, what did the doctor say?" to "Exactly how dilated were you?" What should be a simple matter of me sharing my birthing experience turns into something else entirely: an interrogation.

It shouldn't have to be like that. I should be able to share my birth story, as unusual and painful as it is, without having to constantly defend its authenticity. We should be able to just listen to each other, to hold space for all of the ways that labor and birth can be messy and complicated and confusing and weird, without holding those experiences up to a microscope.

So please, do me and every other person who has ever given birth a favor: The next time someone tells you a birth story that sounds incredible, stop yourself before you pick it apart. If someone's labor and birth sounds like too much to be true, they probably feel even more overwhelmed by it than you do. Just say, "Oh, wow, that sounds intense!" and leave it at that.