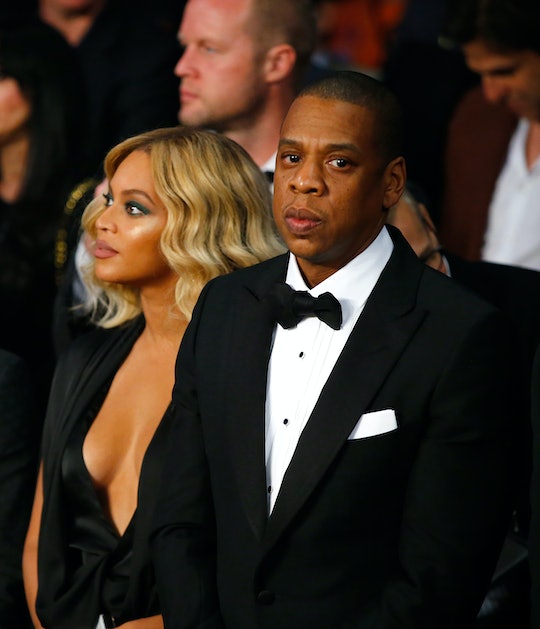 People Are Blaming Beyoncé For JAY-Z’s Infidelity & Um, That's Not How It Works

It was pretty much a given that people would have something negative to say about JAY-Z's super candid interview with Dean Baquet for the New York Times Style Magazine in which he opened up about his relationship with his wife, among many other things. But some people are actually blaming Beyoncé for JAY-Z's infidelity, which totally misses the point about what "equality" in a relationship looks like.

One person tweeted, "Let the hive come for me. Beyonce is a failure at keeping her man in check. It’s her fatal flaw, she has no pimp hand." In a thread, the same user accused Bey of not "eliciting respect" from "her man."

Another woman wrote, "Wild how Beyoncé just lets jay z say anything she needs to keep him on a leash." Both of these sentiments come from two conflicting misogynist ideas. The first is that it's a woman's job to do the emotional (and often physical) labor in a relationship to keep a man "pleased" and happy. Like those old ads you see about making sure a husband has a clean, welcoming home to come at the end of the work day.

The other, which is so contradictory yet often accompanies the other myth, is that the woman has to control the bumbling, stupid man in a relationship. So the woman is both responsible for everything that goes down in a relationship yet has no power. It's totally messed up.

What Should She Have Done?

Others are actually mocking Beyoncé for staying with a man who cheated on her or implying that she's a fool for trying to make her marriage work. If you want to empower and support women, you also have to support them in everything they do that they feel is a good choice for them.

The same people who laugh at Beyoncé for being a "fool" and sticking around are the same people who would likely call her nasty names if she left JAY-Z, since no matter what, everything is the woman's fault. What's even more depressing is that a lot of the people saying these things on Twitter are also, seemingly, women. Which is just sad, since it means that they've internalized some really dangerous patriarchal thinking.

This Has Been Happening Since Lemonade Came Out

It's nobody's business what Bey and JAY-Z do in their own marriage. And it's never anyone's fault when a partner steps out of a monogamous relationship. There are tons of reasons that people cheat, and actually, JAY-Z explained his reasons in his interview this week, taking all of the blame.

During the interview, he mentions that he has been to therapy and learned that he, like many young men, grew up in pain. JAY-Z called it being in "survival mode" and realizing that to make it through tough times, he had closed himself off emotionally from other people. According to his New York Times interview, here's a part of that exchange:

BAQUET: You can't connect because of the way you feel about yourself, you mean?

JAY-Z: Yes. In my case, like it's, it's deep. And then all the things happen from there: infidelity ...

That might not be true for all people who cheat on their partners. But in JAY-Z's case, he's acknowledging that there were some emotional intimacy issues that he had, that were part of the reason he messed up, and that he's sought to fix through therapy and his art.

He added in his interview that he was upset by the pain he caused and ended by bragging, in a way, about the hard work he and his wife did to stay together — because for them, it was important.

So in this particular case, JAY-Z has shared the *actual* reasons things happened between them. More than they even owe the public, really. So speculating that Beyoncé is somehow at fault, for "letting him cheat" or staying with him, isn't just misogynistic, but factually incorrect.

In all other cases of infidelity, it's best to not speculate at all, because it's pretty dangerous for women's rights when we start pretending like women should somehow cater to a man or that they can't make their own decisions about what's best for them in their intimate relationships.