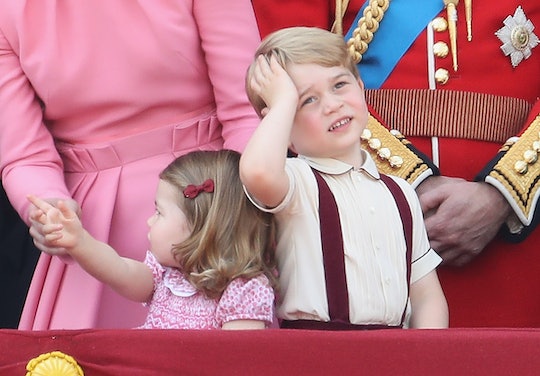 People Are Calling Prince George A Gay Icon Based On This Meme, & It’s Actually Not OK

Over the weekend, Prince George boarded a helicopter while in Hamburg, Germany, as part of the royal family's Europe tour, according to The Observer. And, of course, there's an adorable photo of the moment, which went viral after being memed and re-memed, because it's just that cute. In the photo, George is looking back over his shoulder with his hand on the side of his mouth — the same expression my mother used to make when I made an inappropriate joke at dinner or something. Now, people are calling Prince George a gay icon based on the photo and the resulting memes, and it's really not OK.

Here's how it went down: Prince George loves helicopters, according to The Telegraph. And while he was in Hamburg, he had the chance to board one and check it out, and his joy and excitement were clear. That unbridled joy led to the below photo, which many gay men have since said they love because George's expression reminds them of themselves when they were young. And I get it. As a gender-questioning queer person, I have seen kids who buck gender norms and thought, "Oh wow that was me before my mom told me I had to 'look' like a girl!" It's heartwarming to see young people express themselves in a way you did, especially if those expressions used to have negative associations — like femininity in men or non-binary gender expression.

But a few problems arise when we ascribe our own identities to those children. Let's start with the idea that George's pose is gay because it's more feminine (I honestly shouldn't need to unpack this past that sentence). First, assigning a sexuality to a gender expression is incredibly problematic, because it erases the identities that don't seem to "fit" together. Simply put: there are lots of gay men who are not feminine. Second, gender expression, or using expressions that are associated with the gender binary, does not indicate what someone's sexuality is in any way, as Ana Valens of the Daily Dot argued. Just because I wear clothing associated with a specific gender does not mean: one, that you can assume my gender just by looking at me, or two, that you can assume that because I present as a feminine woman I am straight. Making these assumptions is transphobic and reinforces the idea that we can decide for people, based on their assigned sex at birth or what clothing they wear, how they should be living their lives.

Additionally, all of this chatter about George's sexuality is making a spectacle out of him and the idea that he could be gay. For one thing, George is 4 years old, and no one should assume his sexuality or discuss it publicly before he does (more on this later). But also, drawing a lot of attention to a child's sexuality is the exact opposite of what the queer community should be doing if they want to preach acceptance for queer children. Yes, we want to support people in our community when they need it, and visibility is important. But holding someone up as a public example for the rest of the community or using them for visibility is unacceptable simply because they did not consent to it.

Lastly, Prince George is, again, a 4-year-old. Assuming, prescribing, or analyzing the sexuality of a child who is not yet analyzing it themselves does two things: it strips them of that agency to question and validate a crucial part of their identity, and even more importantly, it publicly declares and speculates about the sexuality of a child who has not come out and has not even discussed that sexuality. "Outing" someone is problematic for a variety of reasons, the foremost being that it threatens their emotional and physical wellbeing. But in this case, publicly discussing a child's sexuality — when he has not come out as gay — does something that everyone in the LGBTQ community hates: it assumes that his sexuality or identification is up for discussion or debate in the first place. All because of the way he stood in a photo.

Unless a person (one that can tie their own shoes and dress themselves in the morning and who understands consent) declares themselves an advocate for a sexuality or identity, we have no right to make them one. And doing so is the antithesis of what the LGBTQ rights movement is about.