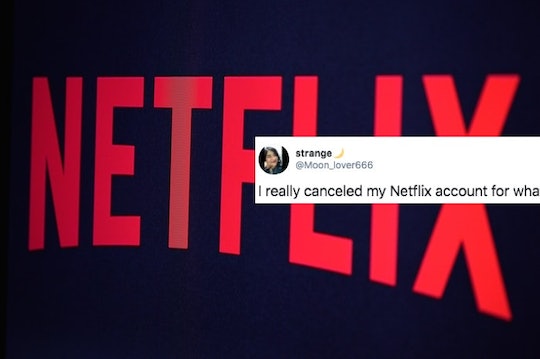 This Decision Has Prompted People To Cancel Their Netflix Subscriptions

After just two seasons, Netflix has cancelled The OA, and fans of the mystery drama aren't happy about it. In face, some canceling their Netflix subscriptions in protest of the streaming network giving the axe to the original show. But will the streaming giant heed their objection?

With little warning, Netflix announced plans to cancel The OA in early August, noting that the original series would not return for a third season. "We are incredibly proud of the 16 mesmerizing chapters of The OA, and are grateful to Brit and Zal for sharing their audacious vision and for realizing it through their incredible artistry," Netflix' Vice President of Original Content Cindy Holland said in a statement, according to Variety. "We look forward to working with them again in the future, in this and perhaps many other dimensions."

Created by Brit Marling and Zal Batmanglij, The OA centers around Prairie Johnson, otherwise known as the "Original Angel," who mysteriously returns home after having been missing for seven years. Even stranger is the fact that, once blind, Johnson can now see and navigate through different dimensions.

Almost immediately, fans started Change.org petitions in hopes of convincing Netflix that the show was worth saving. In the month that has passed since it was created, the "Save The OA" petition has yet to garner its goal of 7,000 signatures (as of this article's publication) while a separate "Save The OA, Renew The OA For Season 3" petition has so far collected more than 84,000 of its 150,000 signature goal.

Cries to "save The OA" also appeared as hashtags on Twitter. One fan even started a hunger strike outside Netflix's headquarters, according to Metro. But ultimately fans' efforts seemed to fall on deaf ears as Marling confirmed on her social media accounts in late August that things really were over for The OA.

That appears to be when fans of The OA decided to cancel their Netflix subscriptions en masse. "I cancelled my Netflix because they cancelled the oa! #SaveTheOA," one fan on Twitter wrote.

"I really canceled my Netflix account for what's probably one of the most beautiful shows I've ever watched," another fan of The OA wrote in a tweet that featured a screenshot confirming their cancelation.

Another fan on Twitter questioned why they, and other fans of The OA, should continue to pay for a service that failed to provide them with what they wanted. "If I go to a restaurant & they take what I like off the menu, I go to another restaurant," they wrote. "I don't keep going to that restaurant bc they have other things to choose from. @netflix is a service, and you cancel a service that no longer provides what you want."

Although Netflix doesn't make its viewership numbers public, the streaming giant is reported to follow an "efficiency metric" when deciding what to keep and what to cancel. Original shows that can bring in new subscribers and retain subscribers at risk of leaving in balance to its production costs are renewed, The Verge has explained. Shows that can't, or are thought to have underperformed compared to their production costs, are cut. Romper's request for comment from Netflix was not immediately returned.

And while mass cancelations may certainly get Netflix's attention, it's unclear if The OA's fanbase, which WIRED has described as "devoted' but "small," will have be able to convinced the streaming network to renew the show.