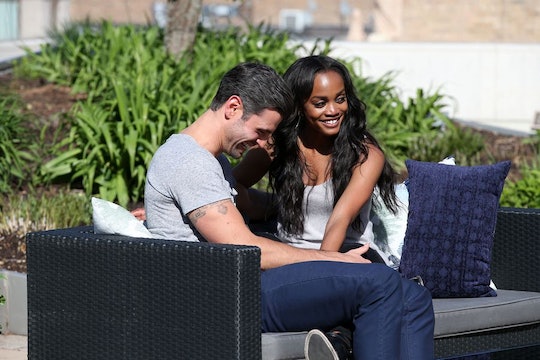 People Are Comparing 'The Bachelorette' Finale To The 2016 Election

Well Monday night's Bachelorette finale certainly was a doozy, and not in small part for the absolutely heartbreaking goodbye between Rachel and Peter. Twitter was having a very hard time accepting it. People were comparing The Bachelorette finale to the 2016 election because both left a huge number of people completely gutted and in denial.

Personally, I went through a lot of emotions on election night, and quite honestly I'm still not a hundred percent sure that 2017 hasn't just been an extended nightmare. I went from being completely sure of the outcome, to terrified, and then a long period of absolute denial until Clinton conceded and I cried myself to sleep. These feelings are not at all dissimilar to how I have felt watching the finale of The Bachelorette as Rachel had an absolutely crushing final conversation with fan-favorite Peter, somehow leading all of Bachelor Nation to believe that maybe she didn't actually wind up with Brian who kisses like he's feeding a baby bird.

Apparently I was not alone in getting election night flashbacks. It was a popular comparison made on Twitter as well, with people feeling their feelings, mostly in GIF form. Apparently everyone will have to get through this together. Again.

At the beginning of this finale, I was pretty sure that Brian was going to be the winner. All signs seemed to be leading up to it. And then Bachelor nation watched one of the most sincere, heart-wrenching, emotional breakups this show has ever seen. For me at least, it honestly felt like I was reliving some of my own most painful breakups. Peter seemed determined not to let Rachel go, but she was not about to let him be pressured into marrying her. She cried, he cried, I cried. Rachel admitted on the live show that she actually cried her eyelashes off. Then Peter came on and said he walked past her eyelashes for two days because nobody came to clean them up and he didn't want to clean them up.

So naturally, everyone began to hope a little bit that maybe Rachel and Peter's love truly was meant to be. After all, she wasn't wearing a wedding ring! And then Peter left as Chris Harrison helpfully pointed out "probably forever," and everyone was taken right back to November of 2016 when all hopes and expectations died. Honestly, I'm sure Rachel and Bryan are very happy (and they did seem very intent on proving it by their constant smooching) and I wish them nothing but love and joy in their future. But that doesn't mean it wasn't hard to watch such a crushing breakup and then see Rachel be totally happy with Bryan. Peter, we all feel for you right now.