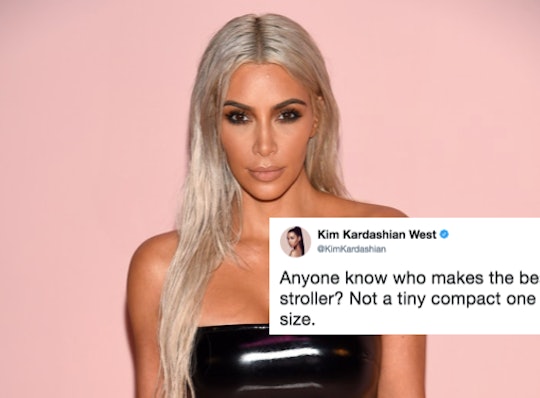 People Are Convinced Kim Kardashian's Surrogate Is Pregnant With Twins, Thanks To This Tweet

Kardashian fans have been anxiously following all the pregnancy news out of the famous family, and with a new tweet, Kim Kardashian has touched off a cascade of new speculation. Now, people are totally convinced that Kardashian's surrogate is pregnant with twins because of a tweet she penned, asking for very specific stroller advice. The reality star, who is expecting a baby via surrogate with husband Kanye West, asked for thoughts on a double stroller. Needless to say, fans are freaking out over the possibility that she might be having two new babies instead of one.

Kardashian confirmed that she and West were expecting a third child a few weeks ago, by tweeting a clip from the upcoming season of Keeping Up With The Kardashians in which she tells her sister via video call, "We're having a baby!" On Monday, Kardashian took baby talk to Twitter again, writing, "Anyone know who makes the best double stroller? Not a tiny compact one but regular size."

Immediately, the responses began flooding in. While plenty of people replied with their recommendations, a whole other group jumped to the conclusion that Kardashian was asking the question because her surrogate would be adding not one new member to the Kardashian clan, but two. Some variation of "Twins?!" and an excited GIF became a repeated theme in the comments, along with many, many "OMGs."

Of course, there's also a far less juicy possible explanation for the tweet. As Kardashian pointed out in a follow-up tweet an hour later, "I have two kids people!!!! LOL." Kardashian and West are already parents to a 4-year-old daughter, North, and a son named Saint, who will soon be turning 2. And sure, North probably doesn't need a stroller anymore, but Saint certainly does.

It probably makes far more sense to assume that the Twitter query was Kardashian simply trying to figure out how to carry around Saint and this upcoming baby around from place to place at the same time, than to start crocheting matching onesies in anticipation of double Kardashian West newborns.

Still, it makes sense why fans got so excited by the possibility of two new tykes. Kardashian has been open about wanting a big family. In an episode of Keeping Up with the Kardashians that aired back in April, Kardashian expressed her desire for more children, according to People, saying:

I'd just love nothing more than to expand my family and just know that I have this world at home that's safe. And if for some reason I left this earth sooner than I really wanted to, then my kids would have a support system at home so that I know they would be OK if I wasn't here.

But it hasn't been easy for her. She's had to go through some rough pregnancies, including dealing with a scary complication called placenta accreta, as she's discussed frequently on KUWTK. And after other struggles with infertility, it became too dangerous for her to carry any more children, leading her to turn to reportedly use a surrogate for her and West's third child.

For fans who have watched her go through so much pain in order to expand her family, it makes total sense to jump to conclusions about the exciting possibility of twins. Still, one new child is plenty exciting. And there's already lots of other baby news going on in the extended Kardashian universe. Kim's sister Khloé is reportedly expecting her first child with basketball player boyfriend Tristan Thompson, while Kylie Jenner is also reportedly expecting her first child. (Romper has reached out both of their reps for comment, but has not heard back at this time.)

So it's probably a busy enough time for the Kardashian household without adding twins into the mix. Still, there's always a possibility that Kardashian knew exactly what she was doing with her double stroller tweet. After all, she is a master of social media. Looks like fans will just have to wait and see.