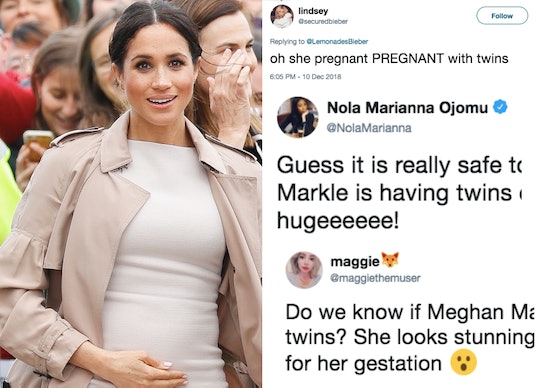 Since Kensington Palace announced that Prince Harry and Meghan Markle are anticipating the arrival of the newest royal, the world has been abuzz wondering about every detail about the new baby. What will the sex be? Does he or she have a name yet? But one speculation has gained undue popularity for a pretty mindless reason: people are convinced Meghan Markle is pregnant with twins, and it really needs to stop.

To sum it up in brief, some people believe that, because Markle is "bigger" than, uh, whatever some people anticipated she'd look like at this phase of pregnancy (keep in mind nobody technically knows exactly what month she's in anyway) she has not one but two children in utero, as Express has reported.

"Guess it is really safe to assume Meghan Markle is having twins cause that bump is hugeeeeee!" one person wrote on Twitter.

"Literally popped out of nowhere. Maybe there was much more of a bump than we thought back when she first showed it off," another added.

However, that's not the only odd "evidence" that people are turning toward to somehow prove their theories that Markle is pregnant with twins.

It may have all began with Paddy Power, a company that takes bets on details of the royal baby's birth, like the date and sex. As TODAY reported, they actually began receiving an "unusual surge" of people guessing that the couple is expecting twins, which lead them to believe that a palace insider could have leaked the information.

“An unprecedented amount of bets on Meghan and Harry to have twins has forced us to stop taking bets on the market altogether,” a spokesperson for Paddy Power told TODAY. “Since the day began, the stream of bets has led us to believe that perhaps the punters — or an insider source — knows something more than we do.”

Of course, this is all speculation at this point, but combined with bump evaluations, it seems to be building a pretty strong case that's convincing people there are two royal babies on the way.

Though it's all fine and fair to bet on things like what month Markle will deliver in and what she might name her baby-to-be, it makes no sense, and can actually be quite harmful, to start assuming she's pregnant with two kids based on her size.

First of all, size does not necessarily correlate to having twins or not, as every woman carries her pregnancy differently and every bump is unique.

As obstetrician Amos Grunebaum told New Idea: “A pregnant woman’s increased weight and size cannot be used as a definitive indicator of twin pregnancy, but many twin mothers say their quickly growing bellies tipped them off that something may be different with the pregnancy.”

Ultimately, assuming anything about Markle's pregnancy — especially when the evidence for which is at least partly based on how she is or isn't carrying — is not only unfair to her, but to women everywhere. To assume that she "shouldn't" or "couldn't" be the size that she is with a single baby is ludicrous, and further reinforces the idea that women are still subject to rigorous body standards, even when growing an entirely new human being within them.

"Bump shaming" is definitely under the umbrella of implying that a woman couldn't possibly look the way she does only carrying one fetus, given her size. It implies that there is a right and wrong way for a mother to appear during pregnancy, specifically, that she shouldn't appear to be too big, too early... which is, of course, total nonsense.

Listen, we don't know, can't know, and shouldn't know what Markle is or isn't having until she decides to share that news with us. Until then? Let's just keep the lighthearted speculating down to birthdays and names.