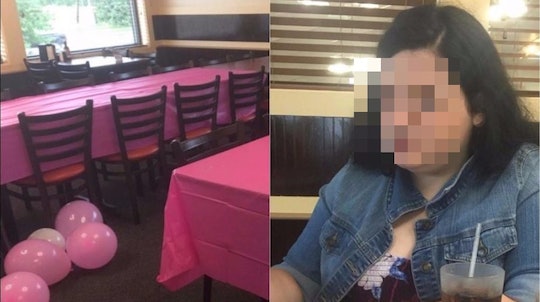 Twitter really came through for an expectant mom-to-be from Ohio this week after only two guests showed up to her baby shower. It was a trauma that left the woman, Chelsie Collins, looking heartbroken and very lonely in the photos her friend (allegedly one of the two attendees) subsequently posted photos of the bust of an event. When the post went viral, internet strangers were outraged on Collins' behalf and promptly started denouncing those good-for-nothing would-be guests and buying up items on her shower registry to make her feel better. But the bummer situation may not have been what it initially seemed; Now, people are convinced that the viral baby shower photos were a giant scam.

The original tweet — which Dorthy Holmes posted of her friend's allegedly desolate-looking shower at a Golden Corral restaurant in Zanesville, Ohio — has since been deleted. But not before it racked up more than 16,000 retweets, according to New York Magazine's Select All. That probably has something to do with the fact that Twitter users soon went from feeling compassionate to suspicious when they realized that the Holmes' story allegedly didn't add up. As Select All's Madison Malone Kircher wrote, it was the good people of the internet who ultimately exposed the situation for what it allegedly seems to have been — a scam.

Romper reached out to Holmes for comment and has not yet heard back.

One user claimed to have called the Golden Corral in question, and said on Twitter that the manager shared that "a party for 12 was booked and 12 showed up." Select All confirmed that there were 12 people at the party — not two, as Holmes originally claimed. But this information came out after more than 300 gifts on Collins' Walmart gift registry had allegedly been purchased and after Holmes allegedly shared her own personal PayPal information with concerned Twitter users.

After the post blew up, Holmes told the Irish Examiner that the two friends had invited 70 people to the shindig via Facebook and that "When the day came nobody showed up" except Holmes and her boyfriend. Collins shared that the attention and generosity had done wonders for her after that blow:

At first I was sad, I felt embarrassed and alone… Then when I heard about the online support it made me feel so much better. There is so many supporters from Twitter to Facebook and I’m thankful for that.

But Holmes seemed to admit that she had been less than truthful in a Periscope video titled "The Truth" that has also been deleted. According to Select All, she said that "six or seven" people arrived to the party about a half an hour after it was scheduled to start. She reportedly labeled what she and Collins had done as "immorally wrong" but noted that she had not explicitly asked anyone to send money or buy gifts.

According to her Walmart registry, Collins is due Sept. 25.