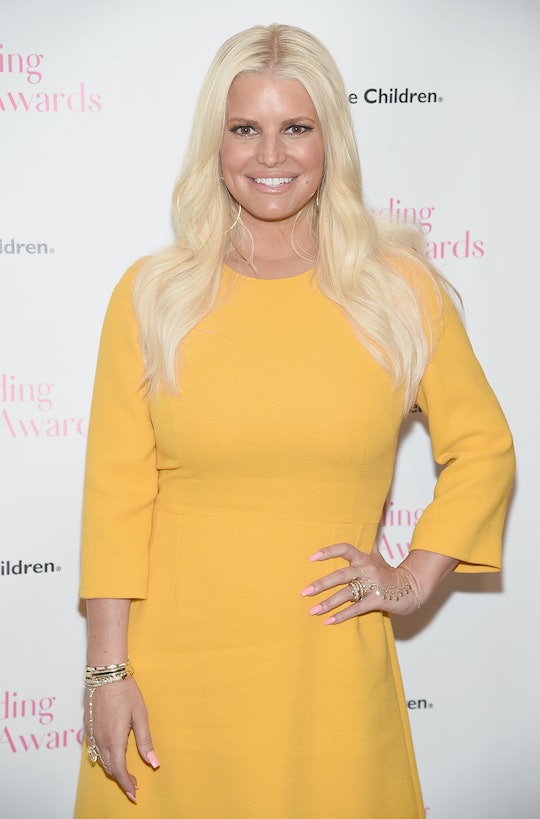 Jessica Simpson has a history of getting picked on. From her decision to let a kid in the swimming pool with a cast to her choice to wear a bikini on a magazine cover while taking a stance on virginity back in the day, each of the reality star-turned-designer's choices seem to get questioned. Now, people are criticizing Jessica Simpson's possible baby name for this ridiculous reason.

As Wonderwall reported, Simpson had what looks like a small baby shower in advance of welcoming her new baby. PopSugar noted that this is her third child with husband Eric Jonhson following 6-year-old Maxwell Drew and 5-year-old Ace Knute.

The images on Simpson's Instagram account show the star glammed up and posing in front of a floral background that contains the phrase "Birdie's Nest" lit up in neon. Simpson's daughter Maxwell is in the shot, along with Ashlee and her daughter, Jagger, which, as Rolling Stone noted, is Ashlee's little one with husband Evan Ross.

The background is a fun touch that made for a pretty pic, and fans naturally assumed that "Birdie" is the quirky-cute name the Simpson-Johnson family has chosen for its new bundle of joy, so it seemed very fitting... So what could be the problem for people?

Well, since it happens a couple other celebs have also gifted their daughters with the same name — Busy Philipps and Brie Bella have both chosen the sweet moniker for their little ones — some people sniffed that it was outrageous copying, as Wonderwall noted.

"You all look [so] beautiful.. but Birdie?? No.. that's Busy Philipps' kids name.. you can come up with a name so much [prettier]," wrote one user, who I guess didn't get the memo that you actually can't copyright a first name (or else there would only be one Lauren, Marie, Jennifer, Melissa, Amber, or Stephanie in the world, instead of, well, zillions).

Poor Jessica. I, too, have been there. When I decided to name my second daughter "Eden," it turned out there was a toddler Eden just a few blocks away. Neighbors informed me I should be careful about "copying," lest I upset little Eden's mom (who I did not know). I backed off from what was my favorite new baby name for an hour... and then thought, "What am I doing?"

Jessica's choice for her child is just that — hers, and her family's. It is literally no one else's business. At least some fans understood this, with one chiming in with, "Name your child whatever you want! I think it is very cute! No ones [sic] business to tell you otherwise."

Meanwhile, other users noted that the moniker has been around for quite awhile. After all, Sandra Bullock's character in the classic Hope Floats was called "Birdee."

But beyond that, how does anyone know that Simpson didn't get inspiration from, say, Philipps or Bella on purpose?

After all, a quick investigation of Simpson's BFF CaCee Cobb's Instagram account reveals that Philipps follows her (Cobb, Simpson's former assistant, is married to Scrubs actor Donald Faison, as Life & Style noted.) So people really don't know the backstory here, nor do they need to.

Simpson always picks slightly unexpected children's names, and this third one seems to be no exception. I wish her all the best in expanding her family, but she sure doesn't need approval to live her life. And I bet that there will soon be many other little Birdies to follow as this adorable name gets out there.