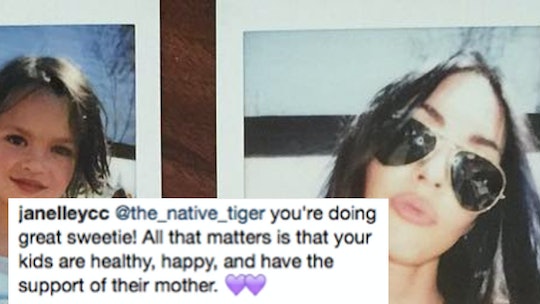 In case you weren't aware, gender is a social construct. And while sex and gender are two completely different notions, the fact remains that gender is fluid, and not assigned. But of course, because humans are humans, there are still people out there who don't understand that, and attack those who do. Such is the case with Megan Fox. The 31-year-old actress and mom of three blessed the world some rare photos of her children last week, but of course, the internet couldn't leave it at that. Yes, people are attacking Megan Fox for posting a photo of her son in a dress — and that's seriously ridiculous. Luckily, though, people are also coming to Fox's defense, so the internet isn't all bad (I guess).

Fox, who has three adorable sons, isn't super active on social media, so it's not surprising that her latest Instagram post got a lot of people talking. However, some of the comments are absolutely horrid. The sweet photo of Fox's children has received horrible comments, such as this one:

Why would you let your SON buy a dress? Wouldn't you encourage them to go for the... idk... ninja turtles outfit. Kids grow based on their parents decisions for them, If your boy wants to buy a dress it would only make sense to tell them no that's for girls, simply because. ITS FOR GIRLS the movie is Elsa in her pretty ice queen dress not Elsa the man in her dress. Get a life this is not "social conformity" this is men are born with penis and women with vagina therefore we were born into our genders and they make clothes for your appropriate "genders".

The photo with which people are taking issue with features Fox's son Noah wearing a dress with Frozen's Elsa front and center. But despite the fact that he looks adorable, and happy, Instagram users had to go and tear Fox down for her parenting decisions. Something that is never okay, no matter what a kid is wearing.

Fortunately, for every ignorant "little boys shouldn't WEAR DRESSES! It's sad that society has made this okay it's quite disturbing," comment on Fox's post, there were ten more posts defending Fox and shutting down her haters. Plenty of users made sure to encourage Fox, telling her "you have a beautiful family!" and that "clothes are just pieces of fabric and fabric holds no gender."

But perhaps one of the most poignant pieces of encouragement was this:

The people giving her a hard time about this picture: why are you so bothered by something that has no effect on you whatsoever? There isn't anything "wrong" about it. What's wrong is how there's grown ass people on this post, making fun of a child. There's actual bad things going on in the world right now that you can direct all your hate at. A little boy wearing a dress is not one of them.