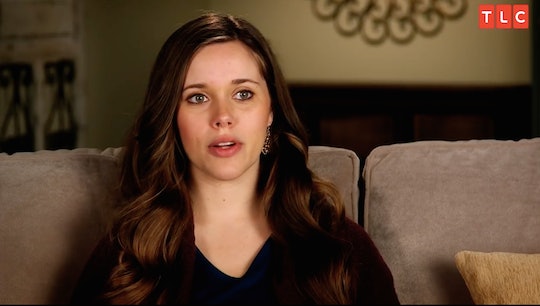 Jessa Duggar Is Getting Shamed For This Video Of Her Sons & Ugh, Just Make It Stop

The changing of the season to fall brings with it pumpkin patches, apple cider, and... mom-shaming? Seems like it, since people are dragging Jessa Duggar over this video of her boys playing in some fallen leaves. Really, she is one mama who just can't catch a break. Adding the most recent episode to the list, Duggar has basically been shamed for just about every aspect of her motherhood.

Her most recent experience with Parent Patrol came on Wednesday, when she posted an adorable video of her two sons — 23-month-old son Spurgeon and 8-month-old Henry — playing in some fallen leaves with the caption, "Apparently it's time for leaf fights. Haha! Henry hasn't figured out how to retaliate."

Rather than comment on Spurgeon's luscious locks, or how nice it is to see little ones outside playing rather than inside glued to a screen, some users felt inclined to nit-pick Henry's lack of footwear or "hope" that Duggar washed the boys when they were finished playing.

"WHERE ARE SOCKS AND SHOES FOR HENRY???? ... For crying out loud!!!!!! It's very cool weather and babies need foot coverings like any other human," one enraged follower commented.

It's worth noting that experts say babies are best going barefoot until they start walking, which is usually between 9 and 12 months — older than Henry currently is. Also, as CafeMom pointed out, "it was in the 70s in Arkansas last weekend," so the boys were far from freezing.

It wasn't just the boys' attire that was cause for concern to some, though. Another user was apparently worried about the "dirt and bugs" that these little boys were lugging back into the house with them. "I don't know about you, I don't want dirt and bugs tracking all over the house and furniture," another follower commented. "It's not the 60s girl. From what I learned Jessa isn't a hippie."

Ugh. Fortunately, other users were quick to jump to Duggar's defense and share their own stories of dirty, barefooted children who turned out just fine. One mama wrote:

They're so cute! I guess people are being jerks about the no shoes thing. Guess what? My kids have gone barefoot whenever they wanted for most of their lives. So you're not the only one, Jessa! Ignore the creeps!

Another pointed out that a little dirt won't hurt, writing, "Studies said dirt is good for your immune system. So let keep your kids play on the dirt and let [them] get dirt on their hands. They are your kids and you know what is better for them."

This is far from Duggar's first mom-shaming rodeo. In the course of her two short years of motherhood, she has been criticized for her "mom wardrobe," her son's verbal development, her children's lack of socialization, not weaning quickly enough, and letting her son play with a box of tissues — among other things. But she has not taken all of this flack lying down. No, Duggar fired back at her haters after the bottle-shaming in an Instagram post saying:

How’s this for a little *SeeThroughSaturday*! That’s my boy! Yes, he’s 22 months old. Yes, he drinks water from a sippy cup, and yes, he still prefers to drink much of his milk/kefir from his bottle–especially before nap/bedtime. (TBH, I wish he wouldn’t have weaned himself early, and would’ve bf till 2. There, I said it.) So there ya have it. If you are experiencing anxiety over this, please share all your wisdom and perfect parenting advice in the comments section below.

While I suppose it's true that people will shame a mom for any and everything that she shares on social media, that doesn't make it right. Rather than focusing on what potential failures can be picked out of photos and second-long video clips, maybe moms could work on building one another up.

I, for one, have had enough of the mom-shaming — and I'm sure Jessa Duggar has, too.