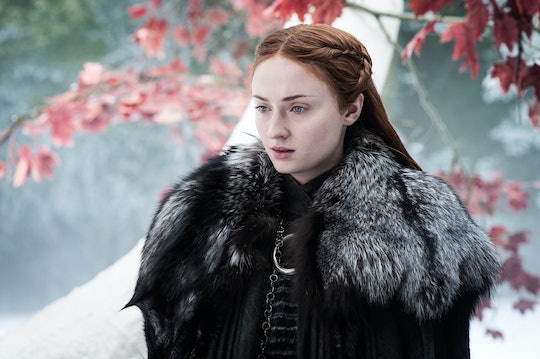 People Are Freaking Out About Arya & Sansa’s Reunion

We were teased a slew of reunions this season on Game of Thrones, and the series is delivering in a big way. In Season 7's fourth episode, "The Spoils of War," we finally got the long-awaited Stark sister reunion, six years in the making. Unsurprisingly, people are freaking out about Arya and Sansa's reunion on Game of Thrones.

It comes on the heels of Sansa's, uh, less than warm reunion with Bran last week, and it underscores a possible theme we may see as the surviving Stark children find their way back to each other. Although it's something we've been rooting for all series long, all the Stark children have suffered unimaginable horrors in their formative years without any family support. They may simply not be the loving, tightly bonded siblings they were in Season 1 ever again. They're certainly far from the carefree summer children we came to know and love back then.

Arya's reunion with her long lost direwolf Nymeria also left fans a little cold. Nymeria didn't recognize Arya, although she did narrowly prevent her pack of muggle wolves from making a meal out of her former owner and her horse. She did make it to Winterfell, though, and after thoroughly freaking out a couple of guards, Arya manages to give them the slip and meets her sister in the crypts. Needless to say, people experienced a variety of big emotions.

Particularly powerful was Brienne's response to seeing the Stark girls back at Winterfell. She pledged a solemn oath to Catelyn that she would protect Arya and Sansa, and with both girls safely back home again, she has officially fulfilled her duties. Bonus: it looks like she finally has a sparring partner worth her time. Arya and Brienne indulged in some gifted swordplay with each other (Arya won!), and it seems like just the beginning of a beautiful friendship.

One particular shot of Arya wheeling her brother Bran through Winterfell's courtyards alongside Sansa was especially emotional to watch. It's been a long time since we've seen them all together, and the passage of time really shows in how much they've grown and how they interact with each other as young adults. Arya seemed a little more open to understanding Bran's new identity as the three-eyed raven (or as Twitter prefers to call him: Emo Bran) than Sansa. But then again, that makes sense. Arya has been engaging with mystical sh*t for six years and poor Sansa just doesn't get it. In any case, the circumstances might be very, very different than they were seven years ago, but it seems like temperatures rose in Winterfell just for a moment when the castle saw the Stark children back together again.