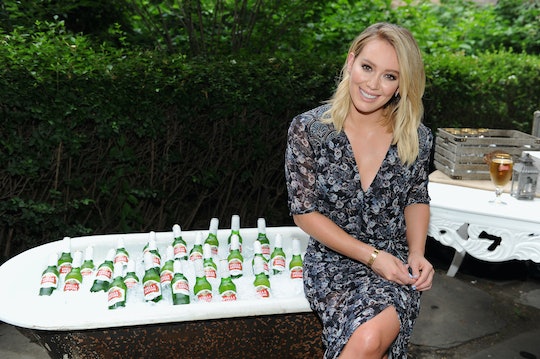 On social media, women are faced with images of perfect bodies every single day. It's hard to be positive about your own self image when faced with perfect looking images of others every single day. So it's probably a good thing that people are freaking out over Hilary Duff's postpartum Instagram photo, because it means that someone on Instagram is finally getting real and getting it right.

On Friday afternoon, Duff shared a photo of the back of her body to her Instagram account. The photo, taken by someone else shows Duff on vacation with her 5-year-old son, Luca, staring out into the ocean. The photo looks like Duff is having an amazing time (how could you not with a view like that) with her young son. But, look a little closer and you can see the slight (I mean slight) flaws on her body. Her thighs aren't perfect and her body might not look like the average Hollywood or Instagram starlet — which is exactly the point that Duff was trying to make in the photo with an incredibly positive message — telling other women to love their bodies because they are beautiful. Duff writes in the photo's caption:

I am posting this on behalf of young girls, women, and mothers of all ages. I'm enjoying a vacation with my son after a long season of shooting and being away from him for weeks at a time over those months. Since websites and magazines love to share 'celeb flaws' - well I have them! My body has given me the greatest gift of my life: Luca, 5 years ago.

In two short hours after posting the photo, the image garnered over 13 thousand comments of affirmation and agreement with Duff's statement.

Flaws and all, Duff must be pretty strong and in shape to hold her grown son. All jokes aside, her body looks amazing and she has nothing to hide. Therefore, it is great to hear her tell that to her fans. Duff continues in the caption:

I'm turning 30 in September and my body is healthy and gets me where I need to go. Ladies, lets be proud of what we've got and stop wasting precious time in the day wishing we were different, better, and unflawed. You guys (you know who you are!) already know how to ruin a good time, and now you are body shamers as well.

People are, of course, freaking out on Twitter over Duff's post, and they should be. It's rare that a celebrity (especially an early 2000's icon like Duff) makes such a bold statement about their body to their followers. Their reactions to Duff's post are supportive:

This isn't the first time that Duff has admitted to being self conscious about her body. According to People, Duff stated in another Instagram post that she was never the biggest fan of her legs. That changed when she realized that her "legs are strong" and that they carry her every single day.

Duff's post is something that everyone can take to heart. It's a message for mothers to be proud of their bodies, for women to appreciate what they see in the mirror, and a message to all of the people out there who have ever criticized someone just for the shape of their body.