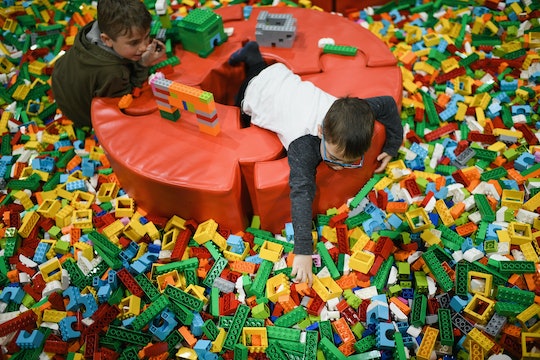 This Kid's Lego Creation Is Genius

Sometimes it seems like kids are a lot smarter than adults give them credit for. Their ability to think outside the box and to see beyond the arbitrary restrictions adults are so often confined by can seriously cause children to have some brilliant notions. For instance, people are freaking out over this kid's genius Lego art, and it's actually pretty inspiring, when you think about it.

Joel Willans, an author and co-founder of a digital marketing firm in Finland, tweeted out a photo over the weekend showing some entries in a Lego "kid creations" exhibit. One photo, in particular, stood out — and for the best reason ever. Other children created some pretty complex designs for the Lego creation exhibition, but the one Willans chose to feature, by a kid named "Riley," took a more simplistic route: just a yellow Lego labeled "worm." Willans captioned his photo, "Riley, you're a genius," showing off the 12-year-old incredible masterpiece.

Sure, any kid can make an intense, multi-level ship or building or skyscraper, or even build a robot with Legos, but Riley's creation is especially creative. And of course, some might call him "lazy" for creating such a simple design, but the fact that he's only 12 and is already making such hilarious jokes with his hobby? That's pretty awesome.

Keep on building, Riley! You've got a bright future ahead of you if you keep saving up that creative energy.

Twitter users were quick to praise young Riley for his inspired use of "minimalism," and "marketing" smarts. Some even noted that they would be "looking for Riley's first exhibition in the Tate in a few years."

Because honestly? Making an entire "creation" out of just one Lego is actually extremely smart. There are definitely some other awesome Lego creations out there, floating around the internet, but it's safe to say that Riley's is absolutely brilliant. Really, Riley's worm could be interpreted as commentary on the fact that we are all going to end up in the same place one day — the ground, just like worms.

OK, so that probably isn't what a 12-year-old was going for, but true art, like Riley's, can be deciphered in numerous ways, so let's just give Riley the benefit of the doubt and roll with it.

Because if nothing else, Legos are meant to be vessels for imagination. They're supposed to be turned into something else, anything that the creator sets their mind to. Not only was Riley's worm adorable, sweet, and hilariously to the point, but it was also artistic to a fault. And that's exactly what Legos — and toys in general — are meant for: fun.