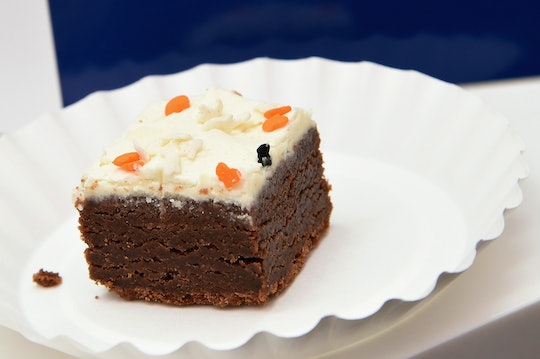 When you're a parent, it's pretty much guaranteed that you'll witness a parenting debate on social media. Although some arguments are more serious than others, some are too ridiculous to believe. Well, get out out the popcorn, because people are freaking out over this mom's claim that she used breast milk in her bake sale brownies. Trust me when I say this parenting scandal is one for the history books.

On July 17, the Facebook page "Sanctimonious Mommy" shared the controversial, anonymous post from the mom in question. In the message, the unidentified mother claimed she used breast milk in her bake sale brownies after realizing she didn't have store bought milk. According to the mom, all hell broke loose when a few of the other mothers at school found out about the ingredient swap.

I need some advice. I made brownies for my school bake sale that had breast milk in them. I didn't have time to run to the store and didn't think it was a big deal (some of those kids could use the nutrition let's be honest). And it wasn't even that much. One of the other moms found out and are blowing it way out of proportion. IDK what to do! Any suggestions? :(

OK, so there's a lot to unpack here. First off, this post is a little suspect due to the fact that a basic brownie recipe doesn't require milk. Although Like Mother, Like Daughter suggests "jazzing up" a brownie recipe with milk, it's generally not required. Also, one has to wonder how the other moms found out about breast milk-gate. You'd have to have impeccable taste buds to accurately detect breast milk in cooked food, right?

Silly questions aside, this story has a very serious side to it. It's possible this mom could have potentially put some kids at risk of illness with her actions.

In an article about the dangers of sharing breast milk, Dr. Sarah Keim, principal investigator at the Research Institute at Nationwide Children's Hospital in Columbus, Ohio, said, according to USA Today:

Someone you think you know well may not be interested in disclosing information about whether or not they're taking medications or using illicit drugs.

Although no one knows if the mom was taking medications or drugs at the time of the breast milk incident, it's a scary thought for the parents at the bake sale to consider. It goes without saying that parents deserve the right to decide what their children eat and drink, and this mom may have violated that right if this story turns out to be true.

... it's sanctimonious because she felt it was perfectly fine (Justified even) to feed everyone her bodily fluids without their knowledge or permission.

It's like that one time I made lemonade with my urine because I ran out of water and didn't feel like going to the store to get more. I only drink Perrier so they were getting, like, the best urine ever. I don't know why everyone was so mad about it.

The urine comparison is a bit far, because, honestly, unless the mom was using drugs or a medication that could pose a danger to kids, there was likely nothing unsafe about her breast milk. Although it remains to be seen if this story is true, it does pose some important points about parental boundaries and the dangers of shared breast milk if that milk isn't from a verified, safe donor. No matter what side you're on, it's clear this mom's actions got people fired up.