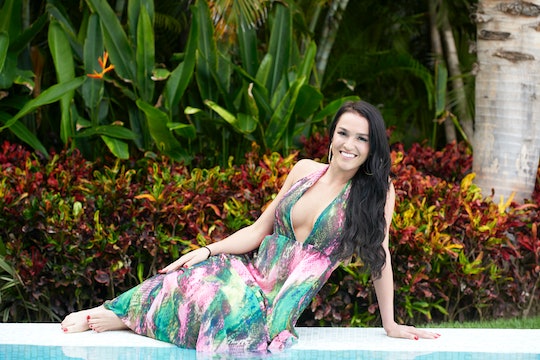 There are always contestants on Bachelor franchises that viewers know won't win the lead's heart, but they're definitely fun to be around. Alexis aka Dolphin Girl aka Left Shark is a prime example. She was part of Nick's Bachelor season earlier this year and while she didn't make it that far, she was memorable – partly because girl can't tell the difference between a dolphin and a shark. While she didn't win The Bachelor, Alexis is back for another chance at love. People are freaking out that Alexis has returned on Bachelor in Paradise – and the dolphin-lover clearly hasn't changed a bit.

Alexis made an impression on Bachelor Nation pretty quickly on Nick's season. She came out of the limo in the same Left Shark costume as in Katy Perry's Super Bowl performance. She insisted, though, that it was actually a dolphin costume...because she wanted to express her love of dolphins to Nick from the start. Alexis is an aspiring dolphin trainer (or was, it's unclear if Alexis is still chasing that dream) and was considerably obsessed with them, to the point of making dolphin sounds any chance she could get. Despite some contestants' annoyance with her, Nick kept her around – and not just after the first night. Alexis lasted several weeks, but she neglected to make it too far.

Alexis quickly became a fan favorite because of her bubbly personality and sense of humor. Now, thankfully, Alexis is back on Paradise – and Twitter fans couldn't hold in their excitement:

Naturally, Alexis is in her Left Shark/"dolphin" costume in the show's theme song. Alexis has clearly not changed at all – and probably still believes she's wearing a dolphin costume. For now, she's appeared to have put her dolphin training on hold to come to Paradise in pursuit of love. If fans on Twitter are any indication, Bachelor Nation hopes that Alexis sticks around. It's unclear as of the first episode of Alexis falls for someone in Mexico, but she has viewers rallying behind her. Just because Nick didn't appreciate all of Alexis's personality – dolphin love included – doesn't mean that she's going to stop going on reality television to find her one-true-love. Bachelor Nation will have to keep watching to see if Alexis's wish (besides swimming with dolphins) becomes reality.