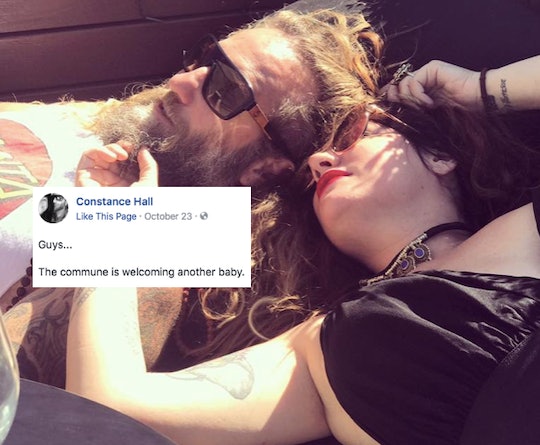 People love a good, joyous pregnancy announcement from celebrities and other public figures, but are less enthused when things get honest and deviate from the strictly cute. Case in point: A lot of people are furious with one Australian mom for talking about abortion in her pregnancy announcement. Constance Hall is a popular author and mommy blogger, so you'd think her followers on Facebook — where she spilled the baby news — would be receptive to her matter-of-fact public reaction to the unexpected soon-to-be addition to her young family, but that wasn't exactly the reality across the board. In fact, some commenters were downright nasty when Hall revealed that she had actually considered having an abortion.

Hall took to Facebook on Monday to announce that "[t]the commune is welcoming another baby" — Hall's fifth, and the first she will share with her fiancé, Denim Cooke. Although this is undeniably happy news for the big family (Cooke also has two kids of his own), Hall was upfront about the fact that she and Cooke had actually been trying to not have another baby right now, using such precautions as birth control pills and the morning after pill. "We actually have no idea how this baby slipped through," Hall shared. And then, not long after, the offending admission:

We are not ready for this and I am petrified, babies terrify me. But are we happy? Pigs in sh*t. Well.... I'm hormonal, I considered having an abortion this morning because Densy slept in.

Estimating that she's about eight weeks pregnant, Hall wrote that she believes that she'll give birth to the baby that she already loves "with every inch of [her] bloated body," sometime in June. But the outraged commenters were much more focused on her abortion admission. Here's just some of what they had to say, according to goodtoknow:

"Glad the child was an accident. Would hate to think she was reproducing intentionally."

"Such RESPONSIBLE parenting! NOT! No doubt she will tell this poor child he/she was an accident and make a JOKE of it!"

"She's not very intelligent because her child will grow up to read the title of this article and will be hurt to read that they were a 'mistake'."

Brutal, right? And the comments even prompted the outspoken Hall to clarify the statement in a comment. In the addendum, so to speak, she wrote that she had not been joking about the would-be abortion had all, but had been "dead set serious" about considering it. She apologized to those she may have offended and assured commenters that she would never joke about miscarriages and fertility issues, which she considers to be completely separate issues from abortion. Still, she was clear that she does not agree with those who think she never should have brought up abortion in the first place:

I am pro choice, I always have been and I believe in normalising abortions, they shouldn't be a dirty secret that we don't discuss in public forums.

Hall has a solid point there. Nearly one-fourth of American women will have an abortion before they turn 45, according to the Guttmacher Institute. Regardless, the relatively common experience is stigmatized to the point that these women more often than not feel as though having terminated a pregnancy is a fact about themselves they have to actively hide, and do not feel empowered to talk about it with others who have made the same decision for themselves.

By being candid and open, Hall did her part to break down that barrier. Even though the blowback was intense and even compelled her to apologize, chances are that it helped some woman somewhere feel less alone.