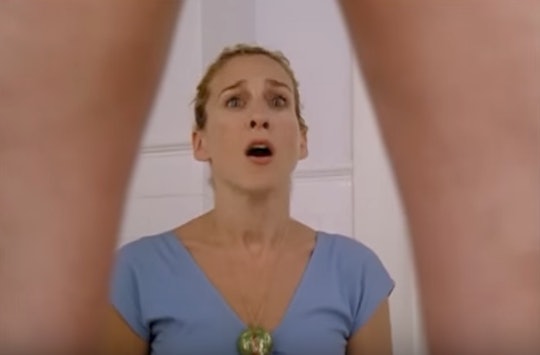 Science Says People Are Hurting Themselves More While Trimming *Down There*

Sex, in the early days of parenthood, is like a mystical sea creature that you know exists but you could never capture on camera. You catch glimpses, but it eludes you every time. Really, your sex life becomes the premise of the entire Finding Bigfoot series. One day, though, you may find yourself in the presence of this cryptid and decide, You know what? Let me clean myself up down there. But it doesn't work out so well; you end up hurting yourself. Turns out, you're not alone: People are injuring themselves while grooming their pubic hair, according to a new study. Who knew personal grooming was a full-contact sport?

A JAMA Dermatology study published Wednesday found that a good chunk of people who trim their pubic region had suffered an injury at least once, according to Forbes. Researchers behind the study surveyed about 7,570 people ages 18 and 65 and discovered that at least 26 percent of respondents have battle scars from shaving, waxing, or laser hair removal; the majority reported being cut, while others have been burnt, developed a rash, or had an infection. Even more hair-raising: More than 66 percent of those participants said they have been injured more than once, Forbes reported.

The findings get worse, actually: According to MarketWatch, some of the pubic-related injuries not only required medical attention, but surgery. Those types of wounds occurred more often when a person was grooming themselves while laying on their back, rather than being helped by someone else.

Not all injuries were created equal, though. Researchers found that, of those people who responded to the web survey, younger participants were more likely to suffer an injury. Same goes for men with a lot of hair. Unsurprisingly, more women reported suffering a wound than men — 85.2 percent compared to 66.5 percent, according to MarketWatch.

The survey findings fall in line with what hospitals across the country have been seeing in their emergency rooms. According to a 2016 Journal of Cosmetic Dermatology study, injuries related to hair removal have spiked between 1991 and 2013, particularly among 19- to 34-year-olds.

Clearly, Americans need to be more careful when it comes to clearing out their pubic weeds. And researchers behind the JAMA Dermatology survey believe their findings could provide a basis for encouraging better grooming habits. After all, who wants their nether regions to look like they mowed their front yawn while drinking way too many martinis?

Of course, I am not judging anyone from their pubic hair woes. As the old biblical saying goes, "They who have not suffered a personal grooming boo-boo cast the first stone." But it is fascinating the sheer number of people who have injured themselves either in the name of personal hygiene or to meet some idealistic, ridiculous beauty standard — or both.