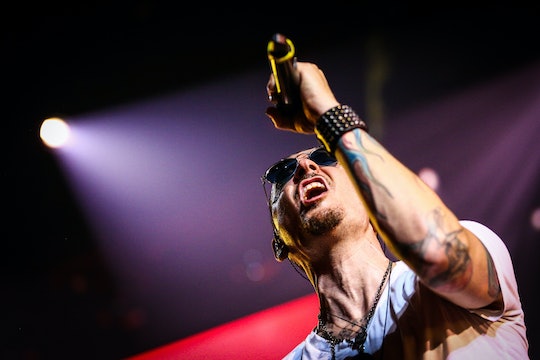 At Sunday night's MTV Video Music Awards, Jared Leto gave a touching tribute to his friends Chris Cornell and Chester Bennington, both of whom committed suicide this year. But right after he introduced a Linkin Park performance, the network cut to commercial. Obviously, people are irate that MTV cuts its Chester Bennington tribute short.

It was a little shocking, especially since Leto's tribute was so moving and heartfelt. He mentioned that he was friends with both Cornell, who hung himself in May, and Bennington. In fact, they were all friends. Bennington performed a cover of "Hallelujah" at Cornell's funeral in May, and hung himself on his friend's birthday in July. Leto mentioned Bennington's family, including six children.

Leto also looked straight into the camera and encouraged any viewer at home who was feeling sad, hopeless, or worse, suicidal, to ask for help and know that they weren't alone. He said:

"You are not alone. There is always a way forward. Reach out, share your thoughts, do not give up, and, I promise you this: The absolute biggest breakthroughs in life lay just beyond the darkest days."

Then he introduced a video of Linkin Park's 2010 performance at the VMAs, when they played "The Catalyst' atop the Griffith Observatory. About 20 seconds into it, the network cut to commercial.

Fans are not happy.

It's understandable that the network had advertisers and time constraints to work with, but it was pretty distasteful to cut the performance short. Especially after telling viewers at home that their feelings matter, that they should have hope.

Later in the show there was a performance dedicated to suicide victims and people who have attempted suicide with Alessia Cara, Logic, and Khalid performing in front of a projection of the National Suicide Hotline number. So it wasn't as if the network took the issue lightly.

But still, any fan of Linkin Park still mourning Bennington might have been on the edge of their seat waiting to see what was, once upon a time, a killer performance. You know — back when MTV didn't cut to commercials in the middle of a tribute to a deceased and beloved musician.

Chester said of Chris, 'Your voice was joy and pain and anger and forgiveness, love and heartache, all wrapped up into one.' Just weeks later, Chester himself was gone. Chester was my friend. As he was to so many. Witnessing his life taught me important things. Especially about working relentlessly, pursuing dreams, and being kind and caring while doing it."

Fans, and each singer's loved ones, deserved better. Both Cornell and Bennington struggled with depression and substance abuse for years leading up to their respective suicides. According to the toxicology report, Cornell had drugs in his system at the time of death, though that was not the cause of his death. Bennington's report has not been released yet. But many people can relate to their stories.

As a network that caters mainly to younger audiences, MTV could have done better addressing mental health and substance abuse issues by going all in with the tribute — if not for Bennington and Cornell, then for all of their fans watching on Sunday night.