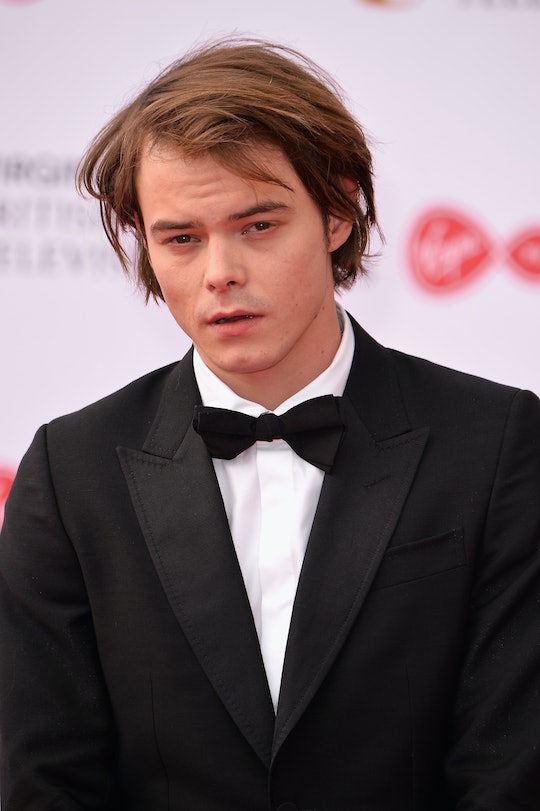 People Are Judging Charlie Heaton Over His Airport Incident, & It's Seriously Infuriating

Stranger Things star Charlie Heaton might be beloved by his fans, but lately, he's been making headlines for some not-so-great reasons. Last month, the 23-year-old British actor was detained at Los Angeles International Airport for alleged possession of cocaine, according to People, and was ultimately forced to return to the U.K. In a statement, Heaton apologized to fans and emphasized that he wasn't actually arrested or charged, but people are judging Charlie Heaton over his airport incident anyway. It's not entirely surprising that Stranger Things fans are shocked or saddened by the news — if the incident affects his ability to remain on the show, that would be pretty heartbreaking. But as enticing as a celebrity scandal can be, the truth is that the criticism facing Heaton probably says more about our lack of compassion for anyone who may have used drugs. Though we have no evidence that Heaton is an addict, the backlash he's faced also says a lot about how we treat addicts in the U.S.

Not long after news of Heaton's LAX incident surfaced, the actor made headlines again for having what some outlets referred to as a "secret love child." In reality, the story seems to be a lot less dramatic: according to Us Weekly, Heaton shares a son with his ex-girlfriend Akiko Matsuura and that the two are "amicable coparents." In all likelihood, Heaton kept the news quiet for the sake of Matsuura and their son's privacy, but the supposed "drug bust" news along with the revelation that Heaton's a dad left many of his fans' heads spinning.

As surprising as that news may have been though, the Associated Press noted that only "trace amounts of cocaine" were found by drug-sniffing dogs, and that it wasn't enough to warrant an arrest. In his public statement, Heaton avoided any mention of drugs or drug use, instead calling the incident "an issue at U.S. immigration," according to People. But according to The Hollywood Reporter, law enforcement officials allege that Heaton also "admitted the consumption of drugs to them." Stories like this definitely make it easy to dismiss Heaton as just another young actor with a coke habit, but that conclusion ignores the fact that, for many Americans, drug addiction is a really big issue.

We might not know much about his relationship with his son, but we do know that Heaton is a dad. And while he may or may not have an issue with drugs — a trace amount of drugs found at the airport doesn't necessarily indicate an addiction — many parents do have drug problems. According to The Daily Beast, an estimated 2.2 million children in the United States live with a parent who is dependent on or abuses illicit drugs, yet the fear of repercussions (such as potentially losing their children) leaves many of those parents reluctant to ask for help. And although illegal drug use shouldn't be condoned or downplayed in any way, the stigma surrounding it often makes it more difficult to find a way out of, leaving both the addict, and their children, to suffer.

But it's not just parents. According to Northpoint Recovery Center, it's thought that only about 1 in every 10 addicts actually gets treatment for their addiction. One reason that often keeps addicts out of treatment? Fear of the backlash they could face if their addiction was revealed. With Heaton, the reaction over the alleged trace amounts of cocaine mostly focused on whether or not he'd be able to keep his role on Stranger Things. But that's not just a celebrity issue: the idea that someone will be judged at their work or in their personal life for admitting that they need help is a big barrier for many addicts who would otherwise reach out.

Giving a celebrity a hard time about a drug use (despite having little evidence of that drug use) on social media might seem harmless, but when the primary message is "get your act together" that does have an impact. Not for Heaton maybe, but for everyone else who sees that message, and who might not realize that it's not that simple. Addiction often leads to a lot of shame — for the addict, for their children and loved ones — and even those who have received treatment can struggle. According to the National Institute on Drug Abuse, relapse is common in recovery (the relapse rate for drug addiction is thought to be between 40 and 60 percent), and while experts recognize relapse as a part of the reality of all chronic disease, most people assume that just means that the addict was too weak to overcome their issues. And that assumption is not even sort of helpful.

Add in the fact that the causes of addiction are incredibly complex — according to American Addiction Centers, it's often a mix of both genetic and environmental factors — the continued judgment surrounding drug addiction only continues to make it harder to actually tackle in a meaningful way. You don't have to support Heaton, and really, you don't have to care about him at all. But instead of laughing at or criticizing celebs like Heaton online, it seems like it'd be much more helpful to stop and think about what those comments really say about the stigma around rumored drug use and addiction. Because America's addiction problems don't look at all like they're going to get much better anytime soon, and in the meantime, that's a whole lot of unnecessary suffering.