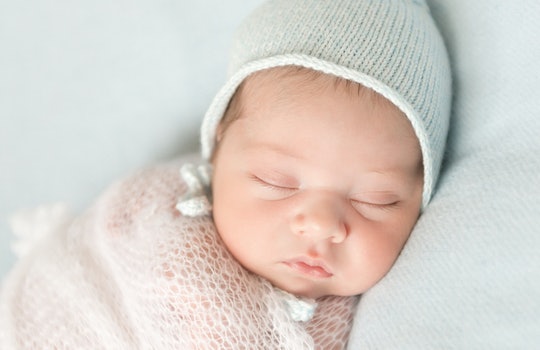 There is nothing more precious than a newborn baby, but newborn babies are fragile. Any wrong movement or touch can have an impact on the baby, which is why during the weeks after birth, it is important to protect newborns at all costs. One state trying to raise awareness about this, as people are knitting hats to protect babies in Oklahoma and it is an adorable, valiant effort.

The Oklahoma State Department of Health is trying to both raise awareness for a leading cause of death for newborns and keep them protected (and stylish) at the same time. Through the Click Campaign (named after the sound that knitting needles make), the health department is asking knitters to create purple hats fit for newborns.

When a baby is born, the hospital will provide a hat to keep their head warm. According to OurEverydayLife, a newborn's head makes up for 21 percent of their total body surface. Without a hat placed on their head during those early moments of life, a baby can lose a significant amount of heat, therefore it is important to keep their head warm. While it is a common sight to see newborns in pink or blue hats provided by the hospital, the color purple has a bigger purpose — it is to raise awareness for and to prevent Shaken Baby Syndrome.

The Period of PURPLE Crying refers to the time two weeks into a child's life where their crying begins to become more frequent and loud, and is also a prevention program meant to raise awareness about Shaken Baby Syndrome. When a baby's cries become unbearable, parents can become frustrated with their child and do something they definitely might regret, like shaking their baby, which could lead to death. The word PURPLE in "the Period of PURPLE Crying" is an acronym made for parents to define if their baby is just going through this common crying spell — and also made for them to stop and realize that there are ways to cope with a crying baby than shaking it, according to Good Housekeeping.

By distributing 4,300 purple hats throughout 41 delivery rooms in the state, the Click Campaign reminds parents that times ahead will be tough, but there are ways to cope with a crying baby that won't cause harm.

If you're a knitter and want to help out this effort, you can. The Oklahoma State Department of Health is accepting hat donations until Oct. 1. There are specific sizing, fabric, and safety guidelines for the hats that can be read on the Click campaign's website with simple and free patterns available for download. Those who are not located in Oklahoma but still want to help out can mail their donations to, according to Good Housekeeping:

These knit hats serve as a small, stylish, and important reminder for new parents handling their newborn babies while bringing awareness to a very important issue.

More Like This
The Worst Fake Babies In The History Of Movies & TV
Kaavia James Obviously Had A Shady Response To Letting Her Mom Be Elsa From ‘Frozen’
There's A Good Reason Why Your Baby Is So In Love With CoComelon
When Can Babies Hold Their Head Up? Experts Explain