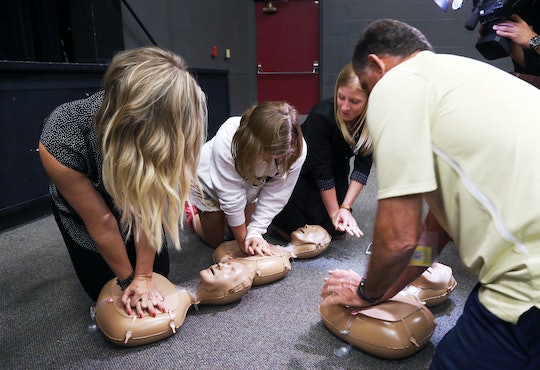 People Are Hesitant To Give Women CPR For An Infuriating Reason, & It's Killing Them

You have probably heard of the gender wage gap when it comes to pay, but it looks like women get the short end of the stick somewhere else, too. Researchers found that people are less likely to perform lifesaving CPR on women in an emergency situation, and it is costing them their lives. Bystanders hesitate to help women for a variety of reasons, making women less likely to survive cardiac events.

The study, published by The Online Abstract, was partially funded by the National Institutes of Health and the American Heart Association. It analyzed almost 20,000 instances of sudden cardiac arrest and found that, of those people in need of CPR while in public, 45 percent of men received CPR from a bystander, while only 39 percent of women received it, according to Mic. The 6-percent difference may not seem like much on its own, but when you consider that the small percentage made women 23 percent less likely to survive cardiac events, it becomes much more concerning.

Audrey Blewer, the study's lead author and a doctoral student, told Mic that CPR dummies might have something to do with why bystanders don't attempt to perform CPR on women as much as men. The Associated Press reported that training dummies tend to be male torsos, which Blewer suggested could impact how training is applied to real-world situations. She also explained that people are reluctant to apply intense pressure to women's bodies in order to administer CPR, telling Stuff, "It can be kind of daunting thinking about pushing hard and fast on the centre of a woman's chest, and some people may fear they are hurting her."

While women do tend to have smaller, thinner bones than men, according to the National Osteoporosis Foundation, making them easier to break, it's unlikely that someone administering CPR would actually know that. Instead, it's more likely that they are acting on their socialized intuition that women are weaker and less able to sustain physical force — even if that physical force is lifesaving. Also, regardless of sex of the recipient, Reuters reported that CPR tends to result in broken ribs and other bones, something that is presumably taught to anyone learning CPR.

Even if women do suffer from more breaks, the risk is clearly worth the reward. Dr. Michael Sayre, a spokesperson for the American Heart Association and a professor at the University of Washington in Seattle, told Reuters, “I’ve talked to survivors and I never had anyone tell me, ‘Gosh, I wish no one had done this because my chest hurts.'” The perception that women are smaller and weaker can literally affect their survival.

Along with lack of exposure to female practice dummies and fear of applying too much force, another author in the study, Dr. Benjamin Abella, told the Associated Press that anxiety about removing a woman's clothing or *gasp* touching her breasts are contributing factors to the discrepancy in CPR application. Removing clothing is unnecessary for CPR that only uses chest compressions, according to the University of Arizona, so people shouldn't worry about that unless the person administering CPR is also using a defibrillator. But even in that case, exposing their chest is probably the least of the patient's concerns.

Abella, who is also a professor of emergency medicine at the University of Pennsylvania’s Perelman School of Medicine and specializes in the sort of cardiac events that call for CPR, explained that, while there is a chance of hand-to-boob contact, people should just get over it and provide help regardless, according to the AP:

You put your hands on the sternum, which is the middle of the chest. In theory, you’re touching in between the breasts. This is not a time to be squeamish because it’s a life-and-death situation.

Coming from a woman with two boobs located near her sternum, please administer CPR to women. I would much rather walk away with a few broken bones than be driven away in a hearse. Gender bias in this case is actually life-or-death and that is just ridiculous.