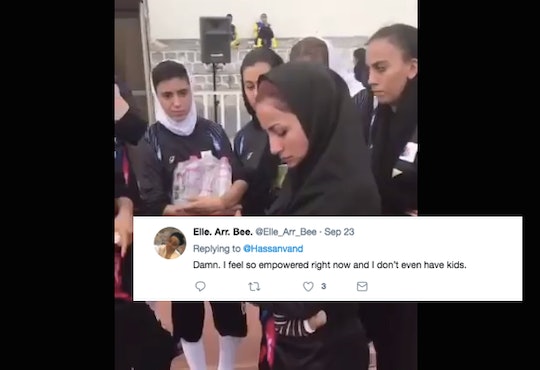 Move over, Rosie the Riveter, because it's 2017, and the world is ready for a new feminist icon. The internet can't get over this rugby coach holding a baby while coaching, because even though women have been conditioned to Have It All™, the truth is that it's really hard to achieve a perfect work-life balance when you're also a mom. So when a woman comes along who has seemingly figured out the secret, you can get jealous, or you can stand up and applaud her. Luckily, it looks like everyone is choosing the latter when it comes to Zahra Nouri, manager of the Iranian National Women's Rugby Team and the Setaregan Rugby Football Club.

Pejman Rahbar, editor-in-chief of the Iranian sports site Varzesh3, shared a clip of Nouri on Twitter last week. She can be seen standing in a huddle with her team while an infant naps in her arms. The caption, roughly translated, reads: "Zahra Nouri, coach of the Tehran Stars rugby team, leads the team with a young child in her arms. This video is short but amazing." The video was later shared by another Iranian journalist with an English-language caption, and between the two tweets, it's racked up nearly 17,000 likes in a week.

The team seems pretty family-friendly; according to BuzzFeed, the official Setaregan R.F.C. Instagram account features numerous photos of Nouri and her players with their kids. People are going bonkers for Nouri, who probably had no idea she was about to become an international sensation when she showed up at the field last week. But she deserves every bit of the acclaim that she's getting, because rugby and parenting are probably the two toughest pastimes on earth, and she's nailing both of them at the same time.

What, no praise hands emoji? Queen emoji? All the emojis?

Nouri is the mom all other moms aspire to be. Well, I mean, not exactly, because I personally have no idea what rugby is other than a badass, very tough sport. But her multitasking skills are on point, right?

Some thought that the video was a a powerful sign of women's strength, and the importance of having each other's backs (excuse me while I go lift a car, then hug all my lady friends one by one).

Others just thought she was a bad b*tch deserving of a high five. Like a modern-day Sacagawea, leading those lazy men through the wilderness with a papoose on her back.

Even outside the mom realm, fellow athletes saw themselves in Nouri. Nothing's keeping her from the game! I could see this turning into a meme.

And maybe the sport of rugby has gained a few new fans, too. What channel is that on, exactly?

Serious question, who would win in a fight between Nouri and an actual, literal mother bear? She seems like she could probably hold her own, at least for a little while. Not that I wish either her or a bear any ill will; I'm just saying.

And for those who are jealous of all the attention Nouri's getting, yes, at least one person out there knows that you're a superhero (well, two, if you count me). Motherhood is hard as hell! You don't have to manage a rugby team while you're doing it to get some recognition. At the end of the day, when you tuck your kid into their bed (or crib), is the house still standing? Have you eaten something? Is there enough clean laundry to get dressed in the morning? If you can answer yes to any of those questions (not necessarily all of them), then you're totally nailing it, too.