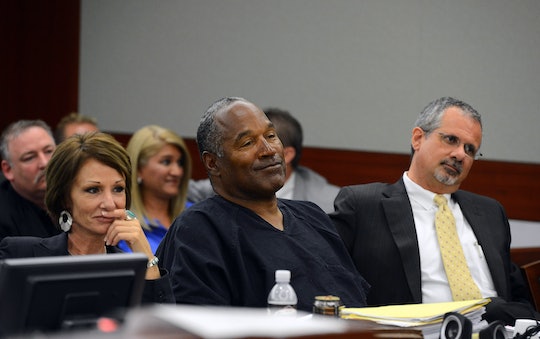 On Thursday, four members of the Nevada Parole Board convened to determine O.J. Simpson's eligibility for parole in relation to his 2008 conviction for robbery and kidnapping charges. Simpson, whose testimony at the hearing is being live-streamed, has a lot of people talking. As expected, people are not impressed with O.J. Simpson's parole hearing answers.

As anyone watching the hearing can see, Simpson does not know when to stop talking. Each time a board member asks Simpson a question, he returns with a long-winded answer that always manages to absolve him of any blame. At one point, Simpson claimed that he was a "guy that pretty much got along with anybody," according to CBS News.

Well, I think it's safe to say there might be some people that would disagree with that glowing assessment, including the guys he tried to rob.

To make matters even more awkward and uncomfortable, Simpson has been laughing, smiling, and joking during the entire hearing. Simpson's light-hearted approach to the parole hearing is a tad confusing given the severity of his conviction. It's also unclear why Simpson's lawyer is idly sitting by as his client delivers rambling speech after rambling speech peppered with bouts of laughter. Essentially, this has been the most cringe-worthy parole hearing of all time.

If you're disturbed by this dumpster fire of a hearing, take solace in the fact that you're not alone. Twitter has been blowing up with hilarious and pointed reactions to the hearing, and each tweet is better than the last.

Yep, this parole hearing is one for the books. It's also important to note that the entire hearing lasted an hour, despite the fact that it was only supposed to be a quick 15 minutes. If only the hearing had wrap it up music like the Oscars, then the public wouldn't have had to endure Simpson's mind-boggling testimony.

Although there's a lot to poke fun at here, the hearing was nothing but disturbing. It's a bit chilling that Simpson, who has a dark history to say the least, doesn't seem to comprehend the seriousness of his crimes. Kidnapping and robbery is not akin to getting a parking ticket — they're serious offenses. One can only hope that Simpson's odd behavior during the hearing isn't indicative of his remorse.

Following deliberation, the board members will determine if Simpson is eligible for parole. The board members will grade Simpson's eligibility on a variety of different factors, including "criminal history, age and gender, history of alcohol and/or drug abuse, and behavior as an inmate," among others, according to the Washington Post. Despite the weird tenor of the hearing on Thursday, Simpson's good behavior in prison bodes well for his release. If Simpson is granted parole, he'll be released on or after Oct. 1. It goes without saying that the Nevada Parole Board has a lot to deliberate on.

More Like This
60 Bits Of Christmas Trivia To Delight Your Friends & Family
Pinterest Predicts Their Top 2023 Trends In Parenting, Beauty, Fashion, Home, & More
Meghan Markle Recreated One Of Her Wedding Looks In NYC With Princess Diana’s Ring
Lizzo's Mom Gushes About Her Daughter As A “Champion Of Others” Who “Builds You Up”