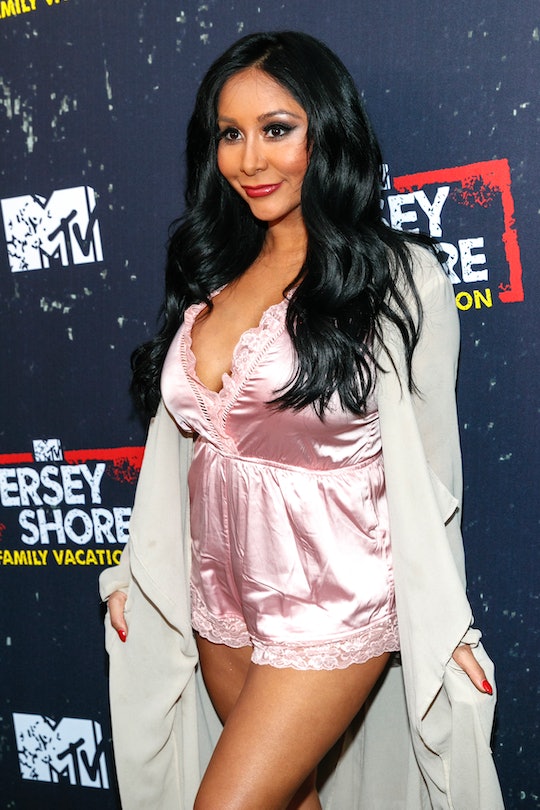 People Are Obsessing Over Snooki Looking "Tiny" In Her Bump Photo, & Just No

Throughout my four pregnancies, I've learned a lot about how society views expecting moms. And unfortunately, it seems everyone has an opinion about what pregnant women should look like. We're chastised for not eating enough if our bump is on the smaller side. And if we start showing early, or our bump is deemed "too big," then we're likely fielding comments about being "ready to pop." Or worse: Getting asked if we're "sure it's not twins." *Cringes* The thing is, every woman shows pregnancy differently. Because newsflash: Every body is different. And apparently, people are obsessing over Snooki looking "tiny" in her pregnancy bump photo — and it seriously needs to stop.

More Like This
What Can We Expect When The Bidens Meet With The Queen?
30 Fun Father's Day Gifts For A Dad-To-Be
20 Sweet Ways To Announce Your Pregnancy On Father's Day
40 Baby Shower Messages To Write In A Card Or Gift For Baby

If you've lost track, Nicole "Snooki" Polizzi and her husband Jionni LaVallee recently announced they're expecting their third child. (The couple already have a 6-year-old son, Lorenzo, and a 4-year-old daughter, Giovanna.) Snooki revealed the big news via Instagram on Thanksgiving Day, writing, "What I’m thankful for this Thanksgiving ❤️ 🙏🏽#family." The sweet post featured a series of photos of her two kids posing with a framed sonogram, according to ET Online.

On Monday, Dec. 17, Snooki dropped her first official bump photo for this pregnancy. Alongside a mirror selfie of herself wearing tight pants and showing off her bare bump, the mom-to-be captioned the Instagram post with, "MAWMA. #nugget3 #blessed #15weeks." (Note: She also revealed for the first time how far along she is; it's going to be a June baby!)

Snooki's Instagram followers were obviously thrilled to get a first look at her bump for baby number three. One follower wrote, "Omg!! Im so happy for you😊. And you look beautiful❤"

Another Instagram user commented, "You look fantastic for being 15 weeks pregnant!! What’s your secret?"

However, a fair amount of commenters also kept throwing out terms like, "skinny" and "tiny" — and actually complimenting the expecting mom for these attributes during her pregnancy, Us Weekly reported. One person wrote, "Your so pretty and so skinny u look great mama."

Another follower commented, “She looks skinnier now than she did on Jersey Shore eps that were filmed 3/6 months ago."

Yet another person added “OMG you are so tiny girl.”

Here's the thing, though. The goal of pregnancy isn't to look skinny or remain tiny — it's to grow a human. Yes, everyone shows differently. And there's nothing wrong with having a little bump. But this isn't necessarily something to strive for. And you're not doing it wrong if you have a massive bump and/or gain weight elsewhere.

Besides, I wonder if any of these well-meaning (but misguided) commenters considered that Snooki might be self-conscious about her bump size? After all, the Jersey Shore star recently shared that she's still suffering from nausea and vomiting during her second trimester, according to E! Online. On Dec. 15, Snooki shared an Instagram photo of herself hunched over a toilet, writing, "Happy Friday! #PregnantProblems #JesusTakeTheWheel #CouldI 😞." Perhaps she's been having a difficult time keeping much of anything down and has actually lost weight during her pregnancy so far. So pointing out how tiny she is might not be the most sensitive move at this point.

A couple of months ago, a greeter at my local fitness center — who probably though she was making a joke, but it definitely wasn't funny — actually had the gumption to ask me, "Are you sure it isn't twins?" followed by maniacal laughter. I had been feeling particularly crappy about myself at the time, and her insensitive comment was the last straw. "Why would you say that to someone?! Seriously!" I yelled, before storming off. (I made sure to to report her behavior to the front desk, and she later apologized. But still!)

Seriously, though. Can we stop with the commentary on pregnant women's bodies? Moms-to-be don't need to be told that we're so tiny or that it looks like we're going to pop at any moment. In fact, it you're going to say anything at all, just go with, "You look amazing!" and leave it at that. Because growing a human is hard enough as it is — and women don't need the added pressure of measuring up to strangers' ideals of what her body "should" look like.