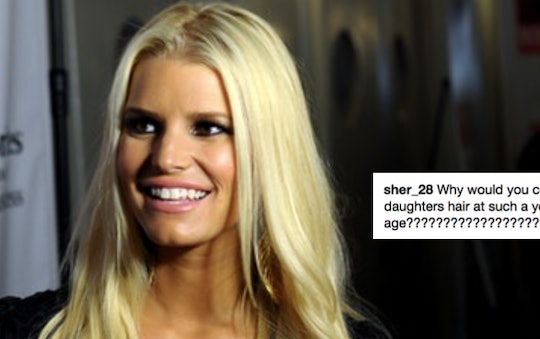 People Are Piling On Jessica Simpson For Her Daughter's Halloween Costume

You'd think that after years of living on the internet, you'd be immune to all the judgement and nastiness that goes down there. But that's easier said than done, especially when the things people are being tormented for are so trivial. Like the fact that people are piling on Jessica Simpson's Halloween photos for the most ridiculous reason.

Simpson posted a picture of her family all decked out for the night and everyone looks happy and like they're having fun. So what's the big deal? No, it wasn't Simpson's totally on point Willie Nelson costume. It was her 5-year-old daughter, Max, who was dressed up as Belle, from Beauty and the Beast.

Max is blonde, but to complete her look for the holiday, she sported a darker hair color. Commenters on Simpson's page were not thrilled that she would dye, even if temporarily, her child's hair just for the sake of a costume. One person wrote to a friend they tagged in the picture, "she died her hair for Halloween ... Really?"

Another added, "Great costumes. Is Maxwell's hair dyed? I hope not her blonde hair was so beautiful!!! Hopefully just temp wash out color."

While people were pretty outraged by the idea that Simpson would subject her daughter's hair to dye for a look, others railed about the safety of hair dyes for young kids.

As you can see, Simpson is Willie Nelson and her husband, Eric, is dressed as Waylon Jennings, another iconic country singer, and little Ace is cowboy. Why would anyone feel the need to mommy-shame this picture when everyone already looks like they're happy and having a blast on Halloween night? Well, here's what some people had to say about it.

Some People Were *Shook*

If you zoom into the picture, you can see some of Max's blonde hair in the braid, so it looks like she just sprayed on a temporary color for the night to get the full Disney effect.

But so what? What if she had straight up thrown her daughters little head into the sink and colored her hair with a safe hair dye? It's really not the end of the world, either way. Although dying a kid's hair isn't totally harmless, as board-certified dermatologist Dr. Margarita Lolis told Good Housekeeping, it all comes down to the chemicals in hair dye and how sensitive kids' hair is. Dying a kid's hair could alter the texture for good, or cause a rash, the publication explained.

Lolis said, "The chemicals are harsh and can damage hair. Ammonia, hydrogen peroxide, and a chemical known as paraphenylenediamine that's commonly used in permanent hair dye can cause very bad reactions."

Going darker is always less damaging for hair, so even if Simpson did use a permanent dye, it would have been her choice to do so. But temporary dyes have been around forever! Think about this: Women who are fans of Jessica Simpson have to be old enough to remember the amazing temporary dyes of the '90s, like Manic Panic? L'Oreal and Redken also make safe, temporary hair dyes that are safe for kids, as Essence notes.

Some People Realized That It Was Just A Temporary Look

A lot of moms enjoy letting their kids color their hair for fun. Bianca Jamotte, a New York mom told TODAY that her 5-year-old begged to color her hair pink this summer, at the height of the unicorn hair trend. Eventually she gave in and let her daughter go for it. She said of the experience, "I figure there are so many things I have to say no to for safety reasons that if I can help her express herself and style in a safe way, then why not?"

Like everything else, it's really up to every parent think about whether they want to allow their children to play around with dying their hair. So lay off Simpson for putting together a great Halloween costume for her daughter.