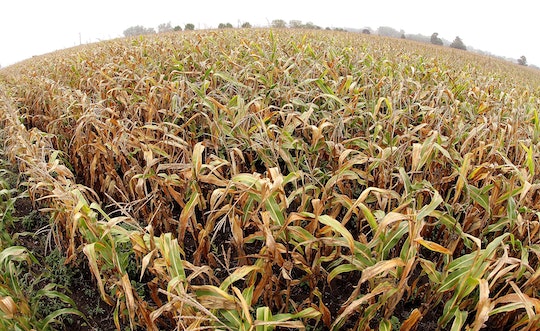 Fall. The time of year when you can dust off your boots and pull out your chunky sweaters and it's socially acceptable to drink pumpkin spice lattes every day. There's a lot to love about fall, but, for parents, autumn also means even more hectic schedules filled with seasonal activities, such as trips to pumpkin patches and corn mazes. These outings can be especially chaotic, considering all the ways kids run out of sight or every nook they can hide in. And, with these factors likely at play, this mom experienced every parent's worst nightmare when she forgot her kid in a corn maze overnight — and people are really piling on her for it.

At the Crazy Corn Maze in West Jordan, Utah, families go to enjoy quality time together outdoors, and take in all of the perks that fall time has to offer. However, all of that was changed Tuesday night, when a 3-year-old boy was found, lost and alone, in the middle of the maze. According the local Fox News affiliate, FOX 13, based in Salt Lake City, Kendall Schmidt, the owner of the maze, described the child as being "upset and crying and really scared."

The child was reportedly found by another woman who took him to Schmidt to be looked out for while they tried to find his family. According to the local news outlet, the child didn't say much, other than his age, so Schmidt went out looking for his family himself.

"I took the blow horn out into the maze and was making announcements that if you had lost a child, please come to the front of the maze," Schmidt told FOX 13.

As many people would expect, Schmidt thought that he would find the child's family, worried about him, wandering through the maze. However, that didn't happen. In fact, the boy was reportedly alone and lost for hours with no one coming to look for him. The maze eventually closed, and the boy was still unaccounted for, so, according to the local outlet, Schmidt called the local police, who then escorted the boy to the Division of Child and Family Services (DCFS) to wait for someone to claim him.

But even though the boy was safe at DCFS, Schmidt was still concerned that his family hadn't contacted anyone about him. "As the night wore on, even at midnight I texted the police officer to see if she heard anything and she hadn't heard anything back yet," he told FOX 13. Then, the next morning, things took a turn. According to CafeMom:

The following morning, the child's mother woke up and realized that he wasn't at home and that he might have been left behind at the corn maze. She called police just before 8 a.m. Tuesday morning, 12 hours after the boy was found wandering through the corn solo.

Many who've read about the incident online have been barraging the mother of the child, calling her irresponsible, saying that the child should have been "taken from her." Here's sampling of what people have had to say:

Yes, this is an unfathomable mistake for most parents to believe. But, it's important to note that police reportedly said that the mother had come to the station in the morning with 10 children and that "this is a situation of multiple families living in one household," according to CafeMom. So, it's extremely likely that the mother was overwhelmed looking after 11 children. And it's also not an entirely unheard of phenomenon. According to KidsAndCars.org, for example, in 2016 alone, 39 children died from heatstroke when they were forgotten in a hot car. So, it seems, even the most well-intentioned parents can forget their children every now and again.

However, that doesn't mean that the well-being of the child isn't important. Ashley Sumner, who works for DCFS, said that they were investigating the situation further, according to FOX 13. She told the news station, "We don't want to jump to any conclusions but we are also concerned mainly about the safety of the child."

It's easy to call this mother unfit, but there's no way to know what exactly was going on when she lost the 3-year-old boy, which is what authorities are trying to figure out as well. But, there's no doubt that being a mom is incredibly stressful and there are always a million things happening, especially when out and about with several kids. At the end of the day, all that matters is that the little boy is safe and sound and authorities are working to ensure he'll stay that way.