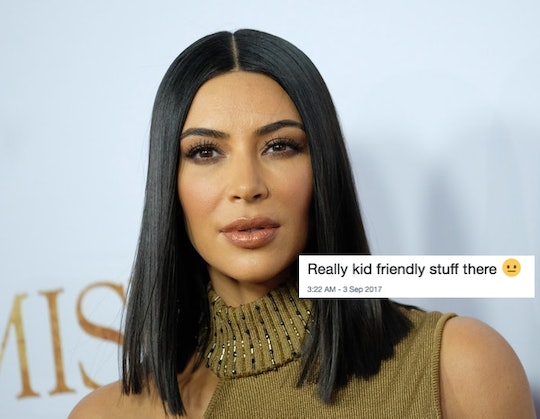 People Are Slamming Kim Kardashian For Her Back-To-School Line

Kim Kardashian is one of the most entrepreneurial women around. People will buy (or buy into) anything she puts her name on and endorses. This is made clear through her contour sticks, children's fashion line, insanely huge social media following, and her long-running staring role on Keeping Up With The Kardashians. And in case you missed it, Kardashian also has her own app, Kimoji, where people can communicate through Kardashian reactions and has merchandise for that. But people aren't happy with some of her latest merchandise for Kimoji right now. Yes, people are pissed about Kardashian's "back-to-school line," but they have some pretty ridiculous reasons as to why.

You can buy a bevy of rather interesting items from the Kimoji online store. The store sells air fresheners, T-shirts, fidget spinners, and pool floats, among other amazing items. Kardashian's "back-to-school" themed merchandise includes items that you would typically think of when it comes to this time of the year — think backpacks, lunch boxes, mouse pads, and post-it notes.

But the content on these items — some of which include butt emoji — is a little concerning for some Twitter users, according to ABC 7 Washington D.C. It appears that parents, especially, are finding the merchandise to be inappropriate for children or school in general.

Romper has reached out to Kardashian's merchandise team for comment regarding the products and is awaiting a response.

Searching through Twitter pulls up some genuine reactions from users concerned with how they thought the items were inappropriate for kids and a school atmosphere:

Although Kardashian's new merchandise is being marketed as "back-to-school" products, it's important to note that it doesn't mean that it has to be used for that purpose. Seriously, Kimoji is meant to be tongue-in-cheek kind of stuff (the website's cursor is a middle finger emoji) and poke fun at Kardashian herself (hence the cry face products). And if you take a look at the full spectrum of merchandise on the website, it definitely highlights that.

According to ABC 7 Washington D.C., the products on the website are aimed towards people who are college-aged and those under the age of 18 should not purchase the products.

As previously stated, Kimoji and the merchandise inspired by it has always been a little risqué. In April, Kardashian released smoking themed merchandise, like lighters and rolling papers, to coincide with 4/20 and drummed up a little controversy in the process. Kardashian also faced backlash for carrying a candle that depicted her as the Virgin Mary in the Kimoji store with some people calling it "sacrilegious" and "disgusting" according to Fox News.

Sure, parents have the right to be upset that Kardashian could be targeting this kind of back-to-school merchandise towards their young child. But fans of Kardashian know that this is all meant to be taken lightheartedly and parents can choose whether or not that merchandise ends up in their child's hands.

It's pretty much guaranteed that you won't be seeing in the halls of a middle school (or younger) anytime soon. But, this merchandise is perfect for people who love Kardashian and want to carry her crying face on their backs.