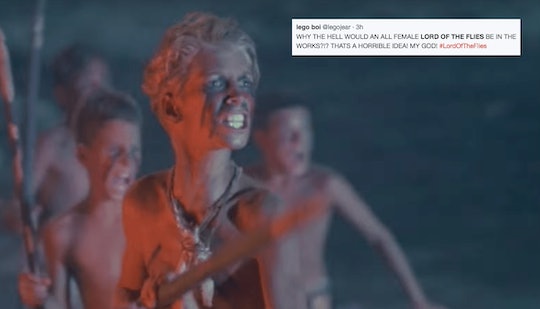 People Are Pissed About The Female 'Lord Of The Flies,' But Not For Sexist Reasons

The gender swap remake has become Hollywood's new hotness when it comes to lazy screenwriting — but there's no denying that the novelty arouses enough intrigue to put audiences in seats, which ultimately, is what matters most to major movie studios. According to Deadline, an all-female Lord of the Flies movie is happening and people are pissed — but not for the reasons you'd think. Critics of all-female remakes have rightly pointed out that it's a gimmick, but as a Lord of the Flies female remake shows, it's not one that's going anywhere anytime soon. The criticism of such a remake isn't that it's sexist and unnecessary — it's that it obliterates the whole point of William Goulding's novel.

Here's your "didn't read the book" version of the story: A group of British schoolboys crash on a deserted island and their attempts at living harmoniously devolve into savagery. Lord of the Flies is all about toxic masculinity — there are no women or girls on the island, and intentionally so, as Goulding himself has said. In an undated audio recording on YouTube, Goulding says he didn't want there to be any girls on the island because it would have turned into a novel about sex — you know, because adolescents here — and he had more important points to make about "the problem of evil and the problem of how people are to live together in a society, not just as lovers or man and wife."

The issue with remaking Lord of the Flies with an all-female cast is that toxic masculinity isn't an issue that a group of women would face. There are plenty of Twitter users who think they're so clever claiming an all-female version of Lord of the Flies would just be a remake of Mean Girls on an island, but it's hardly clever — and is just flat out wrong.

Several studies on group dynamics by sex have found that all-female groups tend to outperform men when it comes to communication, relationships, and task completion. While Lord of the Flies presents an extreme scenario that can't be replicated in a lab, it's unlikely a group of girls would come to the same bloody fates as Goulding's original all-boy cast of characters.

Perhaps one of the bigger issues that an all-female Lord of the Flies recasting points out is the complete lack of imagination in Hollywood. Original storytelling is getting harder and harder to come by, which puts us movie fans squarely in the age of the sequel/prequel/reboot — I'm looking at you, Spiderman franchise. There are so many more powerful stories that can be told about girlhood and womanhood — see: The Fits, Girlhood, and All This Panic— but apparently it's just "edgier" to try and slap a gimmicky "your favorite stories, now with 100 percent more LADIES" schtick than create something original.