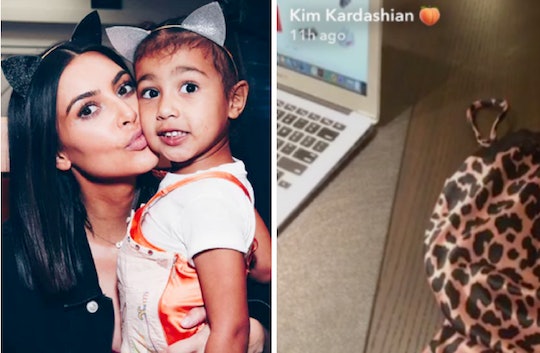 On Monday, Snapchat users got a sneak peek at Kim Kardashian's kids' clothing line, and one item in particular is sparking outrage. No, I'm not talking about the orange velour bikini; impractical fabric aside, the baby bikini debate has been done to death, and it's really not noteworthy. But let's talk about the dress. The silky, leopard-print, spaghetti-strap slip dress with black lace trim. The one Twitter is calling "inappropriate" and "crazy." I'll admit, my first thought when I saw the picture was, "Holy sh*t, that's a negligee!" But when I tried to pinpoint what, if anything, was overtly "sexy" or adult about it, I couldn't. Not rationally, anyway.

The overall esthetic reads as adult, other than the straight cut of the neckline and the nearby laptop that reveals the small scale. It's got a lot of elements that we're used to seeing on children's clothing, just not in combination. A quick search of Carter's inventory produces no shortage of thin-strapped dresses, black lace trim, leopard print boots, and even some items billed as "silky." Not one of them strikes me as "inappropriate" in the context of western children's fashion. What is it about the combination of these elements that makes them seem sexual? Is there a threshold? Can a child wear long-sleeved leopard print with lace? Would this exact design be appropriate for kids if it was lime green?

The fact is, clothing is only "sexual" if we decide it is. It's all completely arbitrary. Considering a particular toddler dress "inappropriate" only paves the way for sexist school dress codes that admonish adolescent girls for distracting the boys from their studies. It's in the same vein as blaming a rape victim for what they wearing when they were assaulted. No, it's not the exact same thing, and it's certainly not as bad, but it's all rooted in the same idea: that clothing makes a person a sexual being who wants to engage in sexual acts. It can't.

People are sexual. More specifically, grown-up people. An adult woman might choose to wear a dress like this because she wants to look attractive — or not! — but a child wouldn't. Children are not sexual beings; they choose their clothing because it's pretty or cool or comfortable. If you tried to explain to a kid what makes this dress "inappropriate," you'd do far more damage to them than wearing it ever could. Children's clothing isn't inappropriate — the way we think about it and about female children's bodies is.