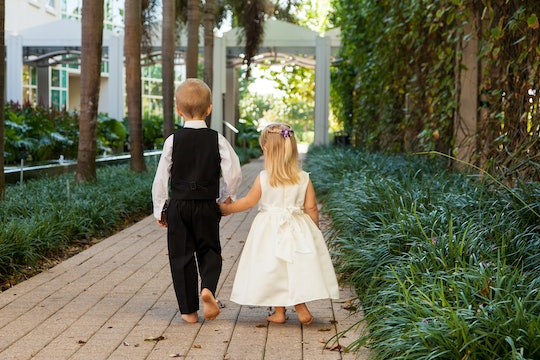 This Viral Child "Wedding" Is Creepy AF, But There’s Something Else Wrong With It Too

In general, child weddings do not, and should not, conjure up particularly positive feelings in people. And while a couple of moms in Texas probably meant for a "mini-marriage" ceremony for their kids to just be a cute stunt, it ended up bringing an important conversation to light. Some people found this specific viral child "wedding" creepy, but the thing is, there's something else wrong with it too that a lot of people are overlooking.

First, a little backstory. In Flint, Texas, moms Breana Marie Pulizzi and Bria Terry decided to do a dress-up photoshoot so that it looked like their young kids were getting married, according to ABC News. To see all the images from the shoot, you can go to Breana Marie Photography on Facebook. Terry's son Sullivan, the "groom," is 5. And Pulizzi's daughter Ella, the "bride" is 3. Pulizzi runs Breana Marie Photography and Terry is also a photographer, so the two reportedly came up with the "wild idea" together.

Sullivan and Ella “love hanging out together," their moms said, according to ABC News, so they arranged the photoshoot to pretend to celebrate their "wedding." The shoot featured Ella and Sullivan "all dressed up," and during it, Sullivan even knelt down on one knee and proposed, according to Inside Edition.

Putting aside some of the uncomfortable aspects of a child "wedding," a lot of people are finding the photo shoot pretty adorable. Sullivan and Ella are cute kids, after all, and they seemed to have fun with the whole thing. In fact, Pulizzi told ABC News:

They would run from one set to another set holding hands the whole time. They even kissed once or twice and it was the funniest thing I’ve ever seen in my life.

Apparently, both kids were all-in for this session of pretending together. There's nothing wrong with kids dressing up and imagining, of course. But there's something else really strange about this whole thing that's being overlooked.

Why is it that some people can look at something like a "mini-wedding" — complete with all the traditional aspects of a wedding like a wedding dress and tuxedo, an altar, flowers, and a cake, according to Mommyish — between a little boy and little girl, and find that cute, but those same people might say parents shouldn't "push" LGBTQ acceptance and inclusion on kids?

Photoshoots like this, while definitely cute, show that society deems it completely acceptable to teach children traditional gender norms that presume heterosexuality as the default. But why is it that parents who might, say, accept that their child is gay at a young age, get flack for it? Why is it that parents who allow their kids to be exposed to non-binary genders or allow and encourage them to see LGBTQ characters on popular kids shows have to deal with arguments that they are "pushing" an agenda on their child?

As someone who has always been very supportive of love in all of its forms, it makes me extremely sad that you or anyone else would try to force this into a gay/straight debate. I personally cannot tell you if my son is gay or straight, because he issues [sic] 5 years old and he loves people not based on race or gender, but on common interest. I have always allowed him to choose his toys and books without gender bias, and I can assure you he is a well rounded little human. He sees my work, and he thinks weddings are beautiful, so he was thrilled to take part. I think the shoot would be just as cute with two girls or two boys. I just happened to have a son, and she just happened to have a daughter. This month the US voted against condemning death penalty for homosexuality. THAT is a real issue. That is something worth writing about if you are truly in search of a story for the LGBT community. I honestly feel that trying to make this a sexuality issue is little more than trolling, and I am sad that you or anyone else would feel the need to succumb to that. It was two children playing dress up. You're digging for a story in shallow ground.

I'd also like to add that there is absolutely nothing I can do to make my child straight or gay. He will be who he is, and I will love him. It's that simple. Things are only complicated when you make them that way.

This photoshoot, whether you find it adorable or not, is encouraging a heterosexual pair-up between two kids. It might be in jest, and you can certainly make the argument that that's fine, but it's setting up gender and sexuality norms for these kids at a very young age. Talking with children about LGBTQ issues, or offering resources for kids who might be questioning their identity, should be just as normal as letting them throw a pretend wedding, or engaging in other make-believe play. Also, the way we imagine romance between opposite sex kids (and even friends as they age) is strange; it's totally OK for Ella and Sullivan to be just friends, and it's a little strange to insinuate that they should pretend to be something more, even if it's for something fun their parents want to do.

I'm completely sure that Ella and Sullivan's moms meant no harm by putting on the "mini-wedding" photoshoot for their kids. It was clearly not meant to be taken seriously, and they might not have thought about the fact that more than 200,000 children were married in the United States over the past 15 years, according to The Independent — another common criticism of their photoshoot.

Regardless of whether Pulizzi and Terry intended to enforce heteronormative roles on their kids, the photoshoot and should make people stop and question the fact that society views a child "wedding" between a boy and a girl as "cute." But parents teaching their children about the LGBTQ community, or parents who support their child's trans identity from a young age, are told they are ruining their kids' childhood or that their child is "too young" to learn about inclusivity. There should be no issue with giving equal representation to non-heterosexual relationships and non-binary gender identities. After all, the definition of indoctrination is "the process of teaching a person or group to accept a set of beliefs uncritically," and that's exactly what we'd be doing by assuming that heterosexuality is the default — and the only — identity worth exposing our kids to.