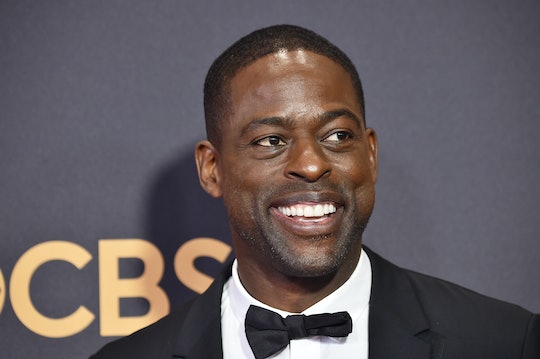 People Are Pissed Sterling K. Brown Was Played Off At The Emmys

It was a historic night for This Is Us fans, especially after Sterling K. Brown snagged the much-deserved Emmy on Sunday for lead actor in a drama series for his performance as Randall on the hit ABC show. But instead of letting him savor this monumental and historic moment, Brown was played off at the Emmys — and people are really pissed that he didn't get to say everything he deserved to say. But, as he does so well on-screen, the actor had fun with the gaffe and handled it gracefully.

But there's a reason people are upset: Brown's win is a big deal. As Vanity Fair reported, he is the first black actor in 19 years to win this Emmy award. So, yeah, he probably had a lot to say.

"Before anything like this happened to your boy, I was a fan," Brown said Sunday night during his acceptance speech, as Vanity Fair reported. "First, last, and always a fan. So, my fellow nominees, I’m a fan. I love y’all." He continued, according to Vanity Fair, as he triumphantly held his trophy:

He went on to thank his co-stars on This Is Us. "You are the best white TV family that a brother has ever had," Brown said, referring to Mandy Moore, Milo Ventimiglia, Justin Hartley, and Chrissy Metz. He also took a moment to thank Ron Cephas Jones, who played his biological father in the show.

However, in the middle of his speech, the producers began to play him off and even appeared to turn off his microphone. The band started playing and Brown tried to talk over them, but it was to no avail. It was painfully forceful, and people definitely noticed and were not OK with it:

Being the first black man to win this iconic Emmy award in nearly two decades is a very big deal and it deserves to be acknowledged. As Vanity Fair reported after Brown's acceptance speech, "only four black actors have ever won in that category before: Bill Cosby took it home in 1966 and 1968 for I Spy; James Earl Jones won in 1991 after playing the title character in Gabriel’s Fire, and Braugher."

Honestly, there was no contest when it came to Brown's striking and memorable performance on This Is Us. His character confronts important issues such as race and the complexities of unique, mixed families like his on the show. And well before his win, Brown has spoken of his admiration for his character and the show itself. He told The Hollywood Reporter in June:

What I love so much about the show and about the character of Randall is that he is black on purpose. The fact that he is black and we actually use that to tell the story of a black man being raised by this white family and still has the experience of being black in America … The feedback I get from people is, "We don't get a chance to see this that often: a successful black man married with two children who is happy and succeeding but still has to deal with the fact that life is not the same, the paths that we walk are going to be different."

Brown's win for a his role as a successful and accomplished black man is important as this type of story is often ignored or forgotten by Hollywood altogether. And the way Brown delivers this message on-screen is clearly why he went home with an Emmy on Sunday night.