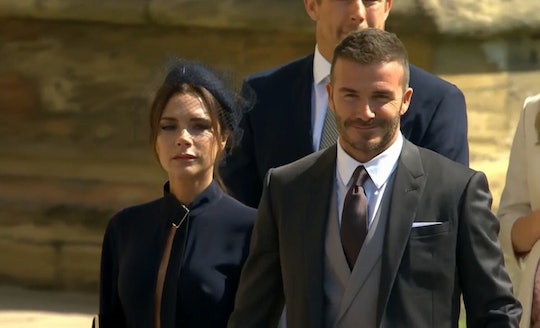 Since people just can't keep themselves from commenting on women's bodies and emotions, people are pissed Victoria Beckham didn't smile while arriving at the royal wedding. Of course, Twitter was ablaze with angry comments about her apparent lack of appropriate enthusiasm to being invited to Prince Harry and Meghan Markle's wedding.

As Posh and Becks arrived at St. George's Chapel in Windsor, people immediately took notice of Victoria Beckham's stoic demeanor. They were commenting not only on her lack of smile, but cruelly positing that it has something to do with cosmetic injections, tweeting things like "Victoria Beckham CLEARLY has so much Botox in her face she physically cannot smile. Get over ittttt, y’all, she’s trying her best."

Let's step back for a minute, people. First of all, no woman owes the public or anyone a smile. Being told to "smile" is something that men have been telling women for time immemorial. It's just one more way people police women's bodies and existence. Unfortunately, many of these tweets are coming from women, showing the insidious nature of how we've been conditioned to believe women should behave. In 2018, at what could be considered a radical and feminist royal wedding, it's unfortunate that we're still dealing with this so often.

Here's the thing: everything women do, especially famous women like Beckham, is under constant scrutiny. I live in New York City, and just walking the 10 blocks from my office to the gym, it's not uncommon for me to get two or more catcalls, or men telling me to "smile." It's intrusive, and it needs to stop. Undoubtedly, this is a happy occasion, but the thought that we should have some say in how women react to any occasion is absurd.

Although, in the case of Beckham, not smiling is actually her thing. It's so much a part of her public persona, that she constantly gets asked about it. In an interview with the Sunday Times, she said "I don't know if it's the years of being photographed and the criticism but I just feel exposed and vulnerable and uncomfortable, and I can't be myself."

She's been in the spotlight for so long, and her marriage to David Beckham has only amplified that. It's so much a conversation piece for everyone around her, the remarks they make when she does smile are just as shocking as the comments about her lack of smile.

There's actually an entire internet movement surrounding the idea of men telling women to smile, and how that crap needs to go the way of the dodo. Beckham, to her credit, has taken the whole thing with a bit of British cheek, designing a t-shirt that reads "Fashion stole my smile."

It should be noted that her husband, David Beckham was all smiles as he arrived at the royal wedding. However, men's reactions just aren't scrutinized in the same way women's are. If a man is stern, he's "stoic" or "stately" instead of "angry" or "bitter" as women are often depicted.

We have no idea how much Victoria Beckham smiles when she's at home, ostensibly, she's just as cheerful as you or I would be while we interact with loved ones or watch Netflix specials in our pajamas. The difference is, her face isn't splashed across every tabloid and newspaper from her home.

If we know anything it's that this isn't the only time her smile — or lack thereof — will be speculated upon and talked about for a lot longer than just the duration of the wedding itself.