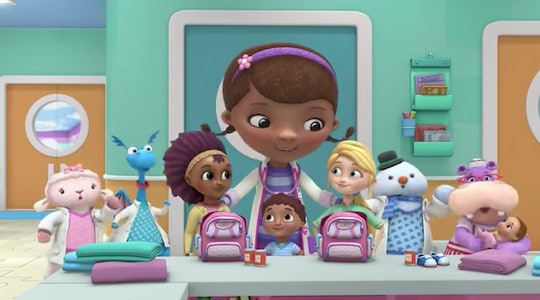 The Disney Channel just got a whole lot more inclusive. The Advocate reported that, on Saturday, the animated television show Doc McStuffins did an episode featuring a family with two moms, and for the most part, people are loving it. And to top it off, the characters are voiced by two LGBT actors: Wanda Sykes and Portia de Rossi.

According to The Advocate, the episode featured a family of dolls learning about the importance of emergency preparedness, following an attack by a toy dragon at their home. The doll family involved just happened to be led by two moms. So the focus of the episode had nothing to do with the same-sex couple, and their relationship was treated as being just as normal as any other couple's, rather than treating it as a spectacle. Instead, the storyline involved a totally different topic, and the diversity angle was just a nice bonus.

However, Animation Magazine reported that Doc McStuffins is the first show on Disney Junior to offer an LGBT-inclusive storyline, and that it's the first animated series to showcase a family headed by a same-sex couple on the Disney Channel. So even though the inclusion of LGBT parents wasn't treated as a big deal on the show, it's definitely an incredible move forward for kids and families watching at home.

The show's creator and executive producer — and the writer of the episode — Chris Nee was especially excited for the episode to air, The Advocate reported. In a statement released through GLADD, she said:

I always envision Doc McStuffins as a show about what it means to accept everyone as part of our communities. As part of a two-mom family, I’m proud to have an episode that reflects my son's world, and shows everyone that love is love in McStuffinsville.

GLAAD president and CEO Sarah Kate Ellis was encouraged by the episode as well. On GLAAD.org, she said:

Children like mine deserve the chance to see their families reflected on TV, and this episode does just that in a beautiful and positive way. Shows like this reflect our real world, and today that includes the many children being raised by gay and lesbian parents who are all going to celebrate this story.

It's important that media reflects the real world, like Ellis said, especially for kids who may be looking for families that look like theirs on their favorite cartoons or other shows. And, according to the American Association for Marriage and Family Therapy, studies estimate that between 1 and 9 million children in the United States have at least one parent who is lesbian or gay. That's a lot of families that are led by same-sex couples, so it's actually a little surprising that a network dedicated to kids programming hasn't explicitly featured one yet.

The AAMFT also reported that, according to the 2000 census, there were approximately 594,000 same-sex partner households, with children living in approximately 27 percent of those households. That was 17 years ago. With all the progress made in same-sex marriage rights in the years since, there are probably more now.

So it's a really amazing thing that such a popular children's program featured a family that looks a lot like thousands of families do. And for the most part, people were pleased by the development.

According to Pink News, however, the anti-LGBT campaign group One Million Moms was not pleased with Disney for featuring same-sex parents. According to that outlet, the group stated:

Controversial topics and lifestyle choices should be left up to the parents to discuss and Disney Junior should not introduce this to young children.

Just because an issue may be legal or because some are choosing a lifestyle doesn’t make it morally correct. Disney should stick to entertaining and providing family-friendly programming instead of pushing an agenda.

And it offered a pre-written letter for supporters to use to threaten Disney with a boycott.

But the group seemed to be in the minority. Reactions on Twitter were mostly positive, with people like actress Audra McDonald tweeting support.

Although there were some rumors before the most recent season aired that Doc McStuffins was going to be canceled, it looks like the show is still going strong and delivering inclusive, important storylines for kids and their families to enjoy.

The show's representation of what families can look like has just gotten a little more diverse, that's all.