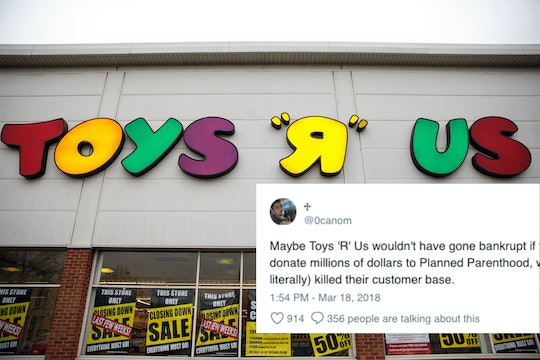 When Toys "R" Us recently announced that it would be liquidating and closing all 735 of its stores across the United States, social media was pretty quick to react. Much of the commentary focused on the nostalgic loss felt by all those who grew up in the age of the "Toys 'R' Us Kid" (because memories), while others either lamented the job losses or eagerly anticipated the opportunity to shop the going-out-of-business sales. But while those reactions may have been predictable, there's another that is honestly straight-up baffling. On Twitter, people are saying Toys "R" Us is going bankrupt because it donated to Planned Parenthood — the reason being that, by supporting the reproductive health care organization, the toy company was aiding in its own eventual demise.

Still confused? Allow me to elaborate. Instead of accepting the completely logical explanation that Toys "R" Us went out of business because of debts, changes in consumer shopping habits, and competition from retailers like Amazon, Walmart, and Target, according to USA Today, a sub-set of Twitter users appears to think that, because Planned Parenthood offers abortion services to its patients, Toys "R" Us actually went bankrupt because the company gave Planned Parenthood money that went toward ending so many pregnancies that there are no longer enough children around to actually buy toys. ‌

The idea, it seems, may have originated in response to a March 15 analysis by The Washington Post's Andrew Van Dam that discussed Toys "R" Us' own admission that the nation's decreased birth rate had a negative impact on the company's business model. Though certainly not the biggest contributor to the toy giant's demise, it does make sense: Toys "R" Us and Babies "R" Us obviously rely on people having children in order to make money, and yet, as Van Dam noted, the birth rate in the United States has "fallen steadily since the Great Recession," reaching its lowest point in 2016.

His point, of course, was that the impact that the falling birth rate had on Toys "R" Us is just the beginning — as Van Dam explained, "economic growth is extremely difficult without population growth," and without a dedicated effort to encourage Americans to have more children, or to encourage immigration to fill in the gap, the economic impact will be inevitable.

Naturally, there are reasons for this: women are having children later, according to The New York Times, and therefore may not have the ability to have more than one or two children. Unintended pregnancies are also decreasing overall, as are teen pregnancies, thanks to the availability of long-term, reliable birth control options, like IUDs (which is a really good thing). And, well, there's also the fact that having kids is expensive. If you and your partner are already required to bring in two incomes just to pay for outrageously-high daycare expenses? You might have some reservations about going for your second, third, or fourth child.

Somewhere along the way though, anti-abortion advocates seem to have interpreted the connection between Toys "R" Us' bankruptcy and the declining birth rate to mean that we obviously wouldn't be in this predicament if women just stopped having all those pesky abortions. And while that should seem like a pretty big reach, there are actually a surprisingly-high number of tweets and memes floating around social media that seem to support it as a totally legitimate theory.

There are those, for example, who seem to consider Toys "R" Us' demise as some kind of economic karmic retribution:

Then, of course, there were the memes:

There are two pretty big problems with this take though. The first is that, well, it assumes that Planned Parenthood's main function is to terminate pregnancies when really, abortions only make up 3 percent of the services it provides, according to CNN (aka not enough to result in a huge decrease in the overall national birth rate). And then there's the question of whether Toys "R" Us even actually supported Planned Parenthood to begin with. Though that's not entirely clear, 2nd Vote, which describes itself on its website as a "conservative watchdog for corporate activism," reported that Toys 'R' Us' connection to Planned Parenthood is that it "matches gifts to Susan G. Komen NYC and MN chapters, which continues to fund Planned Parenthood." In other words, the suggestion that Toys "R" Us' bankruptcy occurred because it financially supported an organization that is apparently driving a decreased national birth rate by being an abortion factory? It doesn't even sort of hold up.

It's not surprising to see that people take issue with what they view as Toys "R" Us' support of Planned Parenthood, especially if they don't quite understand exactly what Planned Parenthood does. But if they are sincerely concerned about the declining birth rate and its effect on the American economy, supporting policies that would actually make it easier for families to have more children — paid maternity leave, for example, or affordable child care — seems much more useful than simply posting a smug comment on Twitter.

More Like This
Reddit Backs Mom Who Got Scolded By Teacher For Not Inviting 30 Kids To Birthday Party
Teacher Shot By 6-Year-Old Student Told School He Had A Gun, Was Told To "Wait"
Florida Teachers With “Unvetted” Classroom Books Could Face Felony Charges
The President Of Ireland Wants To Get Rid Of Homework & Honestly, He's Onto Something
What Parents Are Talking About — Delivered Straight To Your Inbox