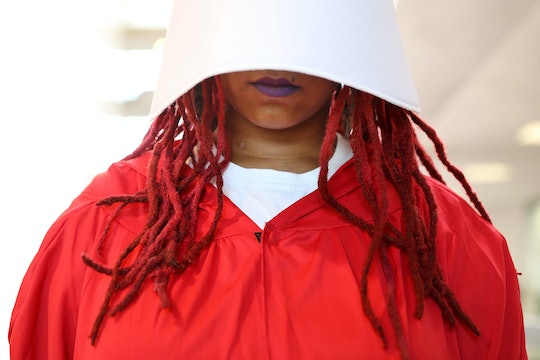 With the creation of a wildly successful drama series, Margaret Atwood's dystopian novel, The Handmaid's Tale, has experienced a marked revival in the past couple of years. The chilling series tells the story — set in the not-to-distant future, mind you — of a patriarchal theocracy that takes hold in the U.S. In this new society, fertile women are rounded up, conditioned, and then forced into bearing children for prominent males and their barren wives. Each month, handmaids are raped by these men (while being held down by their wives) during a "ceremony" that is somehow justified by excerpts from the Bible — all in hopes of saving the U.S. from a rampant infertility crisis. Given the extent to which women are controlled and violated in this terrifying alternate reality, it's no wonder people are seriously upset about this "Sexy Handmaid" Halloween costume.

As USA Today reported, a costume sold online by Yandy has caused quite the stir this week. The costume — which was listed for nearly $65 and officially dubbed "Brave Red Maiden" — featured a red cape, a short dress, and a white bonnet, according to the publication. Its description read: "An upsetting dystopian future has emerged where women no longer have a say. However, we say be bold and speak your mind in this exclusive Brave Red Maiden costume." (Yes, seriously.)

Let's just say Twitter was furious about the existence of a "sexy handmaid" costume. One Twitter user wrote, "Today’s sign of the apocalypse — this “Sexy Handmaid’s Tale” costume. For real?! Did anyone actually watch the show?"

Yet another person tweeted, "I guess we should have all seen this coming ... but, Jesus ... is nothing sacred? Like if there's any pop culture costume that should be exempt from a sexy halloween version, it's a handmaid. My hope is that women burn Yandy to the ground for this."

So yeah. In case you haven't gathered by now, the existence of "sexy" versions of characters who are raped and abused isn't funny or amusing in the slightest. Of course, this isn't the first time Yandy has been slammed for its questionable selection of Halloween costumes. As People reported, Yandy offered a pregnant Kylie Jenner costume in 2017, and it started offering a sexy Donald Trump costume back in 2016.

In response to widespread outrage about the sexy handmaid costume, Yandy has decided to pull the controversial option from its website — and even issued a statement — in response to the overwhelming backlash, according to Time. “Over the last few hours, it has become obvious that [the costume] is being seen as a symbol of women’s oppression, rather than empowerment,” Yandy tweeted on Thursday. The statement continued:

This is unfortunate as it was not our intention on any level. Our initial inspiration to create the piece was through witnessing its use in recent months as a powerful protest image. Given the sincere, heartfelt response, supported by numerous personal stories we’ve received, we are removing the costume from our site.

Although I'm relieved to see that Yandy ultimately pulled their "Brave Red Maiden" costume and issued an apology, it's still deeply concerning that it was even offered in the first place. (Clearly, someone dropped the ball in shutting this tasteless idea down before it even got started.) Unfortunately, I'm sure this won't be the last offensive Halloween costume of 2018 from any company. At the very least, though, I won't have to worry about encountering a sexy handmaid while out trick-or-treating my my kids.