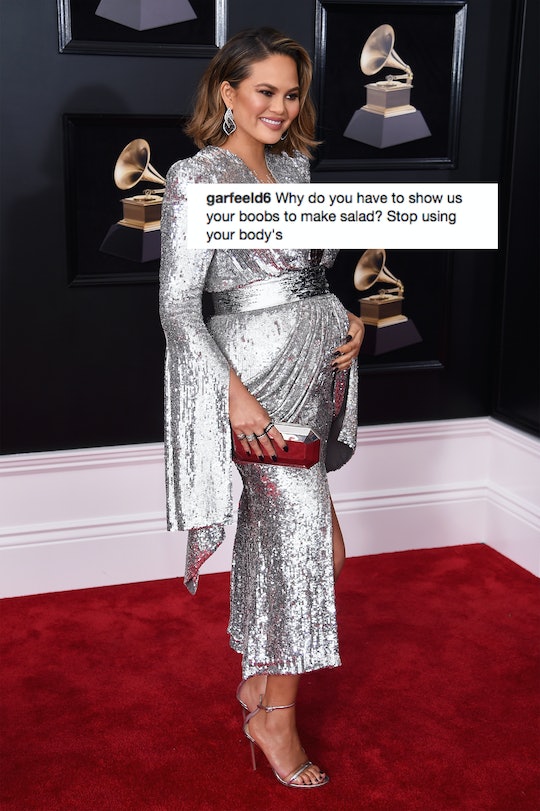 People Are Shaming Chrissy Teigen For This Nude Pregnancy Photo, & OMG, Can We Just Not?

There are few public figures I relate to more than Chrissy Teigen. We are both mid-pregnancy, enduring chubby cheeks and rapidly expanding waistlines. She tweets the words right out of my mouth. That being said, not everyone is as big a fan as I am. People are shaming Teigen for posting a nude pregnancy photo and I am seriously so over it. The soon-to-be mother-of-two has faced her share of criticism and she's not one to take the shaming lying down.

The photo that started it all was a perfect blend of folic acid and body positivity. Teigen is posed in her kitchen, making a salad in the nude. She captioned the photo, "Plz don't shame me I am a strong proud salad making woman just being natural and trying to live my life." People took her lighthearted post way too seriously, in my opinion, and accused her of being "gross" and "ridiculous" and begging for attention. Despite her specific request not to shame her, many users did just that.

One user wrote, "Why do you have to show us your boobs to make salad? Stop using your body," despite the fact that her boobs aren't even showing in the photo. Others left comments like "Anything for attention," and "thirsty." Ugh.

This isn't the first time that Teigen has been shamed. Much of the internet criticism directed at her has to do with the way she raises her daughter Luna. In January, she shared a sweet snap of her and Luna at the park, going down the slide together. For that, she received an onslaught of comments questioning her commitment to safety. One wrote, “Adults shouldn’t slide with a child in their lap. Their legs can get twisted and break. OUCH!” And another is apparently cringing at the sight of her, saying, “OMG this makes me cringe after seeing a friend go down the slide like this with their baby and seeing the baby’s leg break!”

Teigen had the perfect response, which has since been deleted, for those so worried about her playground practices. She tweeted:

Wish you guys would have told me about the leg thing earlier. They broke. Both of them. And everyone else’s in the park broke too just from watching it happen. There are so many broken legs here (heads up photos are a one second moment in time, I was lifting her onto my lap)

But mom isn't the only one that the internet trolls have come after. Showing they have no understanding of boundaries or common decency, they have also made comments about her beautiful, wonderful daughter Luna. When they did so last March, Teigen posted a screenshot of the nastiness with a message saying, "Imagine being this miserable. We are fine, thanks." She followed the tweet with another that read, "Some people are just hell bent on being the f*cking worst." Apparently that is still true almost a year later.

Teigen doesn't seem to be letting the haters stop her from enjoying her pregnancy. She has shared details of her experience ever since first sharing the news in a touching Instagram post back in November. The expectant mother announced the sex of her baby last month, sharing on Instagram that Luna is getting a little brother.

The new baby, like Luna, was conceived via in vitro fertilization and Teigen has been open about the emotional battles that come with fertility struggles. In the April issue of Self, she explained that it wasn't easy to come to terms with:

The big question was why this wasn’t working for us when I was young and he was healthy. I thought, people get pregnant by accident all the time! How does this happen?

Through it all, Teigen has remained a fun, positive voice on social media, bearing it all for her loyal band of followers. While not everyone appreciates her unique voice, I sure do. From one mama to another, keep doing you, Chrissy.