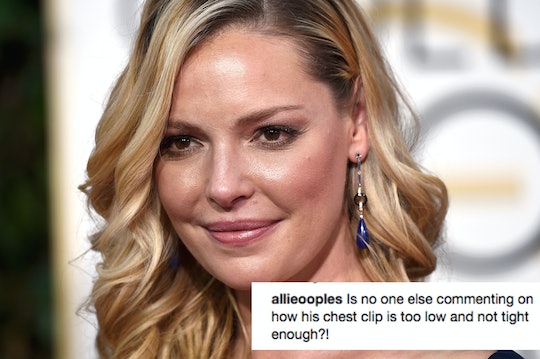 Photos of little ones in car seats can be seriously adorable and I understand why parents feel compelled to share them. But considering the endless onslaught of mom-shaming that comes with just about every car seat shot, it almost doesn't seem worth it. Case in point, people are shaming Katherine Heigl for this car seat photo and it is beyond frustrating. While these comments in particular have merit, internet trolling and mom-shaming aren't an effective way to spread an important safety message.

Heigl posted a photo of her 1-year-old son Josh sitting in his car seat. The post was a part of her list of baby-favorite baby products. "Every parent has a few favorite baby products they just can't live without ... and I'm no exception!" she wrote in the photo's caption. She said the post is connected to an article on her website about "must have essentials."

But rather than jump on her list of products, some of her followers felt compelled to point out a flaw in her car seat positioning. Specifically, they raised concerns about the seat's chest clip being too low to properly brace the boy for impact in the event of a crash.

One person pointed out the error writing, "Is no one else commenting on how his chest clip is too low and not tight enough?" Another included information on the proper location for the clip. "Not to be 'one of those people' but the chest clip really needs to be at armpit level," she wrote.

Not everyone was so quick to doubt Heigl's skills though. One person made the very good point that the photo could have just been posed to show more of the baby. "How do you know it wasn’t pulled down to take pictures? I’m sure she’s got it under control," she said. Heigl hasn't responded to the comments, so it's all just speculation at this point.

It is true that car seat chest clips should be located "at armpit level," as the comment suggests — or, more accurately, in the middle of the sternum. Car Seats for the Littles explained on its website that having the clip positioned either too high or too low can be dangerous:

As important as it is to keep kids safe in their car seats, shaming moms on social media is not how you protect children. Car seat photos seem to automatically generate critical comments on social media, and it really needs to stop. For one thing, sharing "advice" after the fact does nothing to rectify the situation. And no one is perfect. The kid could have been wiggling when the photo was taken, messing up the positioning. Or, like the kind commenter said, Heigl may have just pulled the chest clip down long enough to get a good photo. No matter what was going on when the photo was taken, judgmental comments don't help.

Along with little Josh, Heigl and her husband have two other children together whom they seem to be raising just fine without the help of their online followers. If fans really seek to help educate others on safety, they should do it in a kind way that makes room for the fact that Heigl is doing her best, and maybe we don't always know the whole story behind a photo.