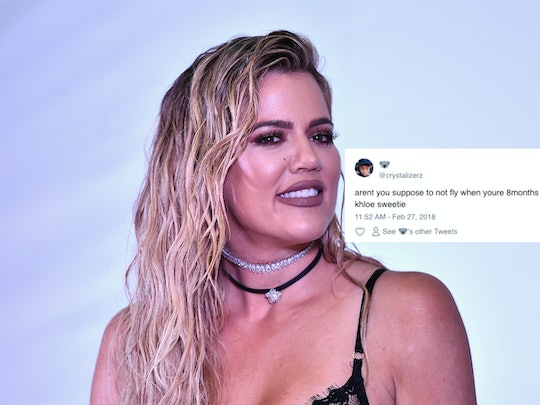 If there's one thing I've learned from writing about moms and motherhood, it's that pregnant women can never win. Someone will always have something to say about the choices an expectant mother makes for herself and her unborn baby, whether they have any actual insight into the situation or not. And this is true whether the mom is a regular woman whose Facebook post has gone viral, or whether she's a Kardashian, or anyone in between. And speaking of Kardashians, in the latest of gossip surrounding the reality TV show family, people are shaming Khloé Kardashian for going to Japan while she's 8 months pregnant, and it's honestly a little ridiculous.

Khloé is currently visiting Tokyo, Japan, with her sisters, Kim and Kourtney Kardashian, according to People. She is also expecting her first child with her boyfriend, NBA player Tristan Thompson; she's eight months pregnant and counting down the days until delivery, according to E! News. And the internet is not entirely pleased that Khloé decided to take this trip while so far along in her pregnancy, to say the least.

The sisters reportedly wanted to take one last trip together before Khloé welcomes her baby. Khloé has been posting updates to Snapchat and Instagram during the visit, and they've definitely got fans talking — mostly because the updates feature Khloé's "baby bump," according to The Sun. A whole lot of people aren't very happy with Khloé for taking the trip at such a late point in her pregnancy, and they're certainly making their feelings known.

Fans on Facebook had all sorts of thoughts about Khloé flying so late in her pregnancy, and they said everything from “Why would you risk travel during a pregnancy??," to "She’s 8 months and flying that far? Not too smart," according to Us Weekly. However, one person noted that, "For those saying she shouldn’t fly, I’m sure her Dr. gave her the OK to do so.”

Which is really an excellent point. Every pregnancy is different, and the truth is, we don't actually know exactly how far along Khloé is in her own pregnancy. According to the American College of Obstetricians and Gynecologists, when it comes to air travel:

But again, every pregnancy varies, and things like specific medical conditions during a pregnancy might change a doctor's opinion on whether a pregnant woman should risk flying. But it's extremely unlikely that Khloé didn't talk to her doctor(s) about traveling to Japan before she did so, and random people on Facebook aren't going to know the particulars of any of those conversations.

People on Twtter got in on the shame game with Khloé too: "arent you suppose to not fly when youre 8months pregnant khloe sweetie," one Twitter user asked. Other people said things like, "Ur not supposed to fly in ur last trimester," but some were supportive of her and wished her safe travels.

Honestly, as long as she got the OK from a doctor, I think it's pretty impressive that Khloé flew so late in her pregnancy. It couldn't have been the most comfortable experience, but she did it, and is hopefully enjoying a really amazing trip with her sisters before her baby arrives. I feel like all I'd want to do at that point is take a nap, and instead, Khloé is being an international jet setter. Good for her.

But of course, everyone's always got to have an opinion about what an expectant mother does, especially if that mom is in the public eye the way that Khloé is. It's important to note, too, that Khloé has talked about her fertility issues in the past, and she's made it very clear that she wants to be a mom, so she's not likely to do anything that she's been warned would endanger her baby.

Can everyone just leave her alone to have one last sister weekend in peace before she becomes a mom? I'm sure "momager" Kris Jenner will have some other Kardashian story ready for the media and fans soon, so until then, let's all just be cool about Khloé's travel choices.