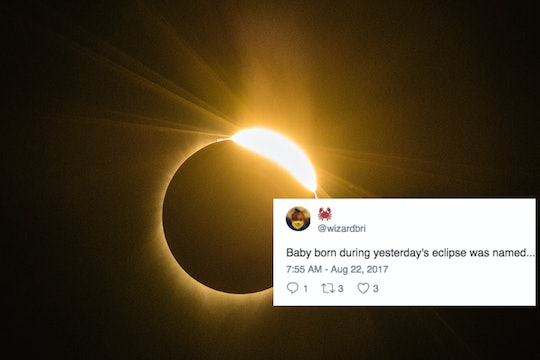 The Internet Is Not Happy With The Mom Who Had An Eclipse Baby, & It's Absurd

On Monday, hospitals across the United States welcomed solar eclipse babies into the world. It goes without saying that giving birth during a solar eclipse is pretty cool, especially when you consider the wide array of the celestial-themed baby names available. Although all names inspired by a solar eclipse are pretty, this mom picked a very simple — and arguably nice — name for her daughter born during the solar eclipse. The internet is displeased with the name, and, though the criticisms are lighthearted, some take it too far.

Prior to the solar eclipse, the internet had a field day discussing eclipse-inspired baby names. It's a pretty fun game to play, especially if you're an astrology guru or a self-proclaimed science nerd. According to Baby Center, some of the best solar eclipse inspired baby names around are "Leo," "Aurora," "Luna," and "Juno." So many cute celestial-themed names, so little time, right?

Well, it turns out people have been seriously overthinking solar eclipse baby names, because a new mom in South Carolina, Freedom Eubanks, just gifted her daughter born during the solar eclipse with a very appropriate, though not quite surprising, name. According to ABC News, Eubanks named her newborn daughter "Eclipse Alizabeth Eubanks."

Yep, Eubanks and her husband, Michael Eubanks, decided not to overthink things. Sometimes it's best to keep things simple and on the nose.

Eubanks explained, according to ABC News:

I kind of felt like it was meant to happen, to have on this day. I think it was just meant to be, her name. We’re probably going to call her Clipsey.

Even better yet? Eubanks was originally due on Sept. 3, and Eclipse was supposed to be named "Violet," according to Thrillist. No shade towards the name Violet (Violet is a gorgeous name), but Eclipse might have an edge here. If your name is Eclipse, it's likely you have a great story to tell.

As for the internet, it was mostly sold on the name... sort of:

Well, it doesn't matter what a few naysayers think, right? First, because these people are not the parents of this child, and second, because no one really has the right to judge anyone's baby name. But, also, this mom doesn't owe the internet anything just because she gave birth during the eclipse. If she likes the name, that's all that matters.

It's unclear how many other babies were born during Monday's solar eclipse, but one thing is for certain: these solar eclipse babies are going to rule the world one day.

Karin McCoy, a karmic astrologer and author of Spiritual Astrology said, according to Inner Self:

The sign of the solar eclipse shows a 'universal' destiny. It is the energy of the collective unconscious that needs to be actively expressed on the Earth at that given point in time for its own balance. The souls that are born into each solar eclipse have been 'dusted' with that energy and have promised to spread that energy on the Earth to help with the growth and evolution of the planet.