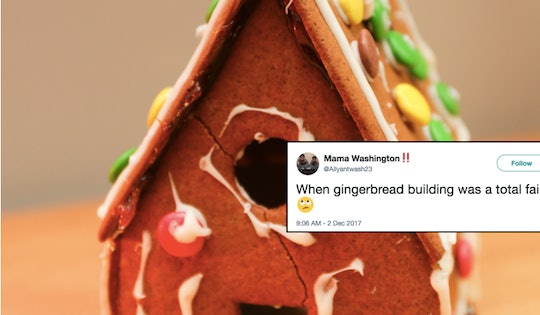 There is so much fun to be had during the holiday season that doesn't involve giving presents or opening them, either. If you have a sweet tooth like I do, then you know that baking sweet treats and making gingerbread houses are one of the most exciting things about the holidays. But any person, especially a parent, knows that making a gingerbread house (especially with kids) is not easy. So you should be assured to know that people are sharing their gingerbread house fails on Twitter, proving that you might need a degree in architecture to successfully build one.

At the end of the day, everything inside (and outside) a gingerbread house is edible, so in the damage of a failed dream is a delicious treat waiting to be eaten. And you can't tell me that doesn't sound sweet and these tweets prove just that.

Because There's Always A Better Alternative To Avoid Failure

When You Have To Smile Through The Pain

The True Meaning Of A "Blue Christmas"

Rest In Peace (Or Pieces)

At Least The Kid Was Creative

When You Try Your Best But You Don't Succeed...

Giving A New Meaning To The Term "Fixer Upper"

OK, so these failures are pretty hilarious. But at the end of the day, it isn't about whether or not you were able to make the best looking gingerbread house or if your frosting held everything together. Like most holiday traditions, the most important part isn't the activity or the activity's outcome — it's about who you do the holiday tradition with and the memories you make from it. Although people don't set out to have their gingerbread house collapse, the memories made along the way, to the point of failure sometimes, are what really matter.

But if you're determined to avoid these failures, there are some tips and tricks for building the best gingerbread house ever that won't collapse (until you're ready to eat it, of course). Instead of using icing to bind the walls and pieces together, according to NPR, melted marshmallows, caramel, and gummy candies are more cement-like. In order to not let the walls cave in, according to NPR, keeping the pieces "square and balanced" will keep the structure architecturally sound.

Here's a tip that might blow your mind (like it did with mine): according to People, instead of loading up the walls with candy after the house is put together, put the candy on each individual wall first — and then put the house together. This makes it easier for kids to decorate and allows the candy to stay put and not fall of while you're working. Like with most items you create, according to People, patience is the most important ingredient and step when it comes to building a gingerbread house. By letting each wall dry, your house is less likely to collapse.

But if you're anything like my own mom, who hated to disappoint her kids, there is a non-edible alternative to keeping your gingerbread house together that works just as well. Instead of using ginger bread pieces, using store bought graham crackers and a little bit of hot glue can save the day. It might not look as fun as some of these failures but it easily does the trick.

More Like This
Parents Have Thoughts After Court Orders Nursing Mom To Use Bottle In Custody Dispute
6-Year-Old Boy Has Zero Regrets After Ordering $1,000 Worth Of Food On Grubhub
Florida Teachers With “Unvetted” Classroom Books Could Face Felony Charges
Harry Styles Running To Hug His 78-Year-Old Super Fan At The Grammys Will Make Your Day
What Parents Are Talking About — Delivered Straight To Your Inbox