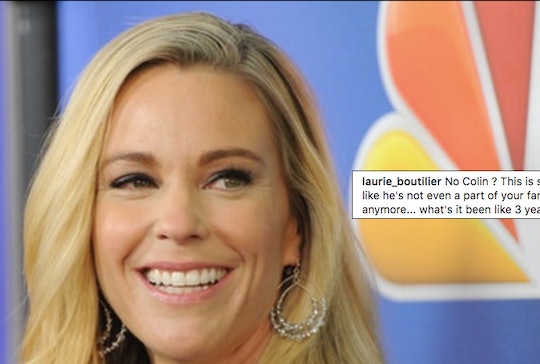 In the days following Halloween, social media platforms are flooded with photos of kids in costumes. Love it or hate it, it's just a part of the holiday season. In true mom fashion, the star of Kate Plus 8 posted a photo of her brood on social media as well. But instead of commenting on the kids' costumes, people are slamming Kate Gosselin for this photo of her family because one of her sons is missing.

In an Instagram post showing five of her 13-year-old sextuplets — Aaden, Alexis, Hannah, Leah and Joel — Gosselin showed off their costumes, captioning the photo:

I had a trick-or-treating date with a couple of cute pink dinosaurs and a few adorable astronauts!

But, one of the quints — Collin, who has special needs — is absent from the photo, as he is enrolled in a treatment program away from home for what has been described as "behavioral issues," according to People. Commenters on the post were quick to point out his absence and chastise Gosselin for not having him at home.

One such user wrote, “No Collin, of course. That’s sad. He’s been gone for like 3 years now.” Another commented, "He should be at home it is terrible.”

One user even went so far as to suggest that Gosselin change the name of her show to Kate + My 7, adding: "If he was so out of control you would of [sic] never been able to film with him as much as you did without incident. Sometimes parenting is not easy but that does not mean send your child away long term."

Gosselin — who, according to E! News, went though a very public divorce with ex-husband Jon Gosselin in 2009 after rumors surfaced about an alleged affair on his part — has not spoken up about the comments on her Halloween post yet, but she has spoken publicly about why Collin is not at home. During an interview with ABC’s Nightline in November 2016, she said:

It was not even really a choice, it was on the advice of his doctors and it had to happen. He’s plodding along and we are too. This is the best thing I can do for him right now and that comforts me.

Trick-or-treating isn't the first family event that Collin has missed since leaving home. When the quints celebrated their 13th birthday this past July, Collin missed out on the festivities as well. The comments on this Instagram post were dominated by the same kind of question: "Where is Collin?"

In an interview with People from a few days after the quints' birthday over the summer, Gosselin shared that she is just glad that every one of her children is receiving the care that they need. But that isn't to say that life without Collin is easy for her, as she told the magazine:

I am comforted with the fact that my kids, all of them, each unique child, is receiving exactly what they need and that hasn’t changed. I’ve said that before, I’ll say it again. It’s a bittersweet moment [and] we’ve had many of them. You can’t do anything without realizing he’s missing. So we may not say it, but it’s always there.

The exact condition that led Collin to go away for treatment has not been publicly explained. However, Gosselin has shared that he has some "educational and social challenges," according to In Touch Weekly. In a 2015 episode of Kate Plus 8, she said: "This is a work in progress for him that we’ve sought many specialists help on. There are changes coming for him. I think it will result in a change of school for him for this upcoming year and beyond that, we’ll see."

In August of 2016, she expanded a bit more when explaining that Collin had been sent away for treatment, according to People:

Collin has special needs. [There’s] a fairly fluid diagnosis of what those needs are, but he needs to learn certain strategies to help him deal with things. This has been a struggle we’ve had for a very long time, and it’s one I’ve dealt with on my own. I’ve felt very alone in this. By the same token, it’s not something that has only impacted me or him — our entire family has been impacted.

Fans seem to believe that Collin would be better off at home, but that decision is ultimately up to the family. An alleged source close to Gosselin told Hollywood Life that Collin is "flourishing" at his special needs school and is doing much better away from the "chaos" of reality TV. If this source is to be believed, then what Gosselin is doing is working. Regardless, Collin's treatment is a family issue and simply shouldn't be up for public commentary.