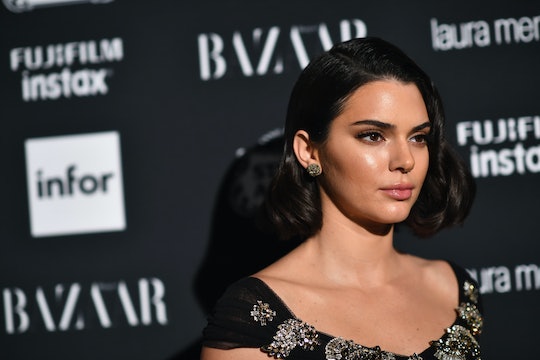 People Are Telling Kendall Jenner “You're Next” After Sisters’ Pregnancies, & They Gotta Chill

On Tuesday, a report started to spread that Khloe Kardashian was pregnant with her first child. The report was confirmed by "multiple sources," according to Us Weekly, and like that, the news spread like wildfire. This is coming off of Kylie Jenner's reported pregnancy, which broke the Friday before. Also, FYI, Kim Kardashian is expecting a daughter in January with husband Kanye West via surrogate. TL;DR, there are a lot of Kardashian babies happening, which is causing the internet to turn it's gaze toward Kendall Jenner, who is supposedly "next" in line to get pregnant... at least according to the internet. And really, all I can say back to that is, umm, no thank you?

There is one thing that is happening, though, and that is the super weird and creepy Ring-style threat that Kendall Jenner is "next" in line to become pregnant. Seriously, WTF? It sounds like some weird low-budget cult classic starring Sarah Michelle Gellar from the early '90s, where a bunch of college girls get swept up into a ring of pregnancy and the new girl (Gellar is definitely not the new girl) is like, whoa, you guys, this is weird.

Because this is so weird, you guys!

What. Is. Happening. First of all, let's not treat Kendall like she has to live up to some trend within her family, no matter how coincidental it is. While these pregnancies certainly are a surprise to the public, we don't know what's going on behind closed doors. We're really not the people to become the family planners for the rest of the Kardashian crew because we don't know what's really happening in their lives. Give the woman some autonomy over her body, Twitter! She calls the shots.

Also, Kendall doesn't need to live up to your, my, or anyone's expectations. She's currently crushing it as a supermodel, and we should praise her for her current successes, not sign her up for the Kardashian Fertility Klinic.

Some people have already impregnated Kendall in their minds, which is a huge NOPE. First of all, let's treat Kendall like she's more than a vehicle for alleged boyfriend, Blake Griffin's, sperm. Seriously, we can do better than that. Also, to paraphrase a business mogul, internet sensation, pop culture icon, and mother of two (soon to be three beautiful children), Kim Kardashian, can Kendall live?

It is probably chaotic enough to be a member of the Kardashian/Jenner family. Add to that the frenzy surrounding two of your sisters being pregnant. And your life being watched by a combined 108 million people (on Twitter and Instagram, alone) every single day, do you really think this woman wants to hear people saying she's "next" to get pregnant?

On the flip side of things, if Kendall isn't the next one to get pregnant, she's the one with a strong moral compass. At least, that's how some users on Twitter see it. Sure, I'll confidently say that Kendall Jenner has a solid head on her shoulders. But, in saying that, it sounds like the others do not have good heads on their shoulders because they're pregnant? Kylie Jenner may be 20 and reportedly pregnant, but let's consider that she's an adult woman with a solid career and family behind her, who has reportedly made the choice to have a child. Sounds like a solid head. And Khloe? Khloe is in a relationship with a partner she clearly loves, so does that mean she doesn't have a solid head on her shoulders, too? No, it doesn't, and it does a huge disservice to women everywhere who do not fit the traditional (often out-dated) family mold.

Instead of expecting something from Kendall Jenner — expecting her to get pregnant to, LOL, keep up the joke, or expecting her to remain "good" — let's just let her be who she is and make the decisions she wants to make. I promise, it will be fun.