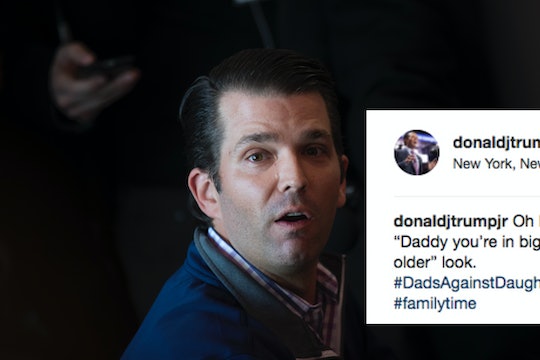 People Are Trolling Donald Trump Jr. For The "Creepy" Way He Captioned A Photo Of His Daughter

Sometimes it surprises me that my late father was never one of those dads who didn't want his three daughters to date people. He was an Italian immigrant who skewed traditional when it came to family and gender roles, but he never said or did anything that'd seem controlling of our dating lives (that was all my late grandfather). The Trump men, on the other hand, I'm not surprised about. In fact, people are trolling Donald Trump Jr. for the “creepy” way he captioned a recent photo of his daughter. And, considering what he wrote, I can't say I blame them.

On March 12, Trump Jr. posted a photo to his Instagram account of his daughter, Chloe, in a ski outfit, looking towards and smiling at the camera. The image is sweet and innocent, and seems to be from an outtake from a weekend ski the Trump Jr. family took recently (if other photos from around that time are any indication). From the photo, it looks like Chloe is having fun on what I can only assume are the kiddo slopes. And then Trump Jr. had to dump all over it with a caption that social media users are labeling "creepy."

Oh Man the dreaded 'Daddy you're in big trouble when I get older' look. #DadsAgainstDaughtersDating #weekend #familytime

Let's all take a second to acknowledge that Chloe is just 3 years old, and the youngest of five children between Trump Jr. and his soon-to-be ex-wife, Vanessa. She's a toddler — a tiny little toddler who is only a year older than my son and shares a birthday with my son's father, which is kind of a weird bit of trivia to know.

Now, read the caption again. It could be considered a bit much, no? Social media users seem to think so. The common argument that's popping up: Trump Jr. seems to be sexualizing his toddler daughter by suggesting her smile hides a nefarious future regarding her dating life.

In addition to Twitter, some people commented directly on his Instagram post. One person wrote, "You don't own her, you pig," while another commented, "Or you could just let your child control her own body. She's not your property." (Romper reached out to Trump Jr. for comment, but did not hear back in time for publication.)

Of course, some of Trump Jr.'s followers defended the eldest Trump son by calling the caption a "joke." But is it really a joke when you're projecting your fears about your daughter's dating life on a kid who hasn't even seen first grade yet? She is not a sexual object, and shouldn't be the subject of an insidious caption that shames her for choices she has yet to even make. TL;DR: It's not funny.

To be honest, the whole "Dads Against Daughters Dating" hashtag is problematic — but that probably should go without saying. The attitude is controlling. It removes a girl's agency and bodily autonomy. It's sexist because there is not an equivalent for sons. And, again, it's controlling.

Daughters aren't meant to be kept under lock and key, while sons are allowed to roam free. Daughters should't be shamed for being human, while sons get high fives and a round of shots. Daughters should be protected, not sheltered and controlled. When you have movements like "Dads Against Daughters Dating," you are just perpetuating rape culture.

My dad and I may have had our laundry list of issues, but when it came to dating, he had no say. Nor did I think he wanted to. All he wanted was for me to be happy in my relationships. And that's what dads should want.