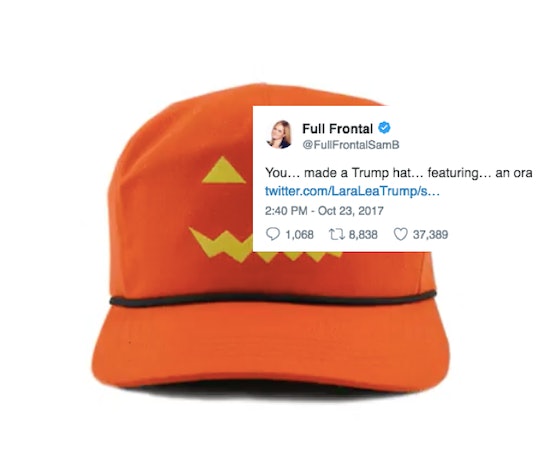 People Are Trolling The Pumpkin MAGA Hats On Twitter, & It's So Hilarious

Going full-on spooky, the GOP released a Halloween edition of the Make America Great Again hats that became the unofficial uniform of Trump supporters everywhere. Along with somehow instantly selling out, the hats created an avalanche of social media hilarity. People are trolling the pumpkin MAGA hats on Twitter and their jokes are on point. From pointing out the family resemblance between the hats and their creator to questioning the self awareness of the president's party, Twitter has left no stone unturned when it comes to mocking these monstrosities.

The bright orange "MAGA Pumpkin Hat" — reportedly "proudly made in the USA" — goes for $45 each on Trump's apparel website. It has a jack-o'-lantern's face embroidered on the front above the bill and Trump's infamous campaign slogan of "Make America Great Again" written across the back. While obviously intended to look like a pumpkin, the public seems to think that the hat looks like, well, something else.

The internet onslaught began when Lara Trump, Eric Trump's wife and the president's daughter-in-law, posted a photo to Twitter of herself clad in the orange hat in front of a giant portrait of Trump himself. Along with the hashtag #MakeHalloweenGreatAgain (but when was Halloween anything less than great, I ask), she urges followers to order their very own hat today. While it was most likely an attempt to show her support for Trump merchandise, the tweet sparked a series of tweets that were far from supportive.

The hat was also featured on the GOP's official Twitter page, with a short video showing its front and back sides. The copy on this tweet reads, "Order your limited edition #MAGA hat before they all disappear." But honestly, given the reaction that Lara's photo caused on Twitter, the GOP may be left wishing that the hats would disappear.

Celebs and average Joe's alike were quick to point out the uncanny resemblance between the Halloween hat and the current leader of the free world. Many seem to think that "an orange monster" is an appropriate representation of Trump, but maybe not the wisest marketing strategy.

Others gawked at the admittedly high price people are willing to pay for what is little more than a generic trucker's hat for hunting season. These limited edition MAGA hats are almost double the cost of the original red ones that Trump wore on the campaign trail. $45 can buy more Pumpkin Spice Lattes than you can possibly drink in one sitting. You tell me, what's the better investment?

Some users helpfully pointed out that Trump seemed to miss the connection between his own questionable skin tone and the color of the hat. Although, others mention that his marketing team must have had on some pretty big blinders to not see those red flags pop up.

The whole "hat looks like Trump" joke is a pretty common one, but people have still managed to put a unique spin on it. President Trump, how does the hat resemble you? Let Twitter count the ways.

While orange is probably the only color that would have worked for a pumpkin hat, the shade alone opened the door for jokes — and left it that way.

All that is missing from the hat to complete the presidential look, according to Twitter, is a bit of that yellow cotton candy hair that he wears so well:

As comical as the hat promotion turned out to be, no one can accuse it of being unsuccessful. They sold out almost instantly, according to Money. Considering they are not a promotion benefitting a certain cause, it looks like the profits generated by the pumpkin hats will further line Trump's pockets like the original MAGA hats do, according to CNBC. Concerns over the legality and lack of precedent for an active POTUS selling his own campaign merchandise while in office aside, the hats are popular. But how many of them were purchased in earnest and how many went on to become the finishing touches to an army of costumed big orange monsters? The world may never know.

More Like This
Two Young Children Have Been Hospitalized Because Their Formula Is Out Of Stock
This Free Website Connects Parents Who Need Formula With Those Who Have It
Biden Signs Law Banning Unsafe Infant Sleep Products Attributed To Over 200 Deaths
13 Moving Photos Of Kids, Families, & More Protesting Abortion Rights Across The Country