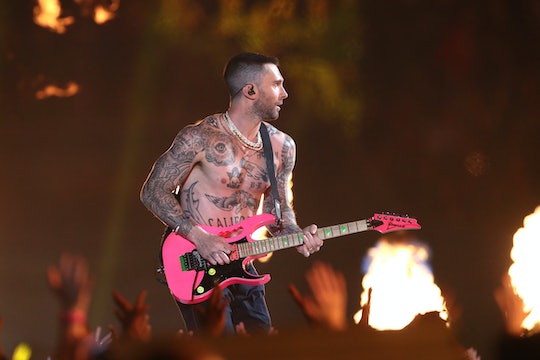 The Super Bowl LIII halftime performance was pretty scandal-free on the whole, but there was one notable moment: Adam Levine ended up taking his shirt off, baring his tatted chest for the world to see. But Janet Jackson fans weren't loving Adam Levine's shirtless moment, especially considering the backlash Jackson experienced after her nip slip during the Super Bowl halftime show in 2004.

Walk back in time with me, folks, to the infamous "nipplegate" scandal. Jackson, sister to the members of Jackson 5 and bonafide superstar in her own right, was performing the hit song "Rock Your Body" along side Justin Timberlake at Super Bowl XXXVIII in Houston, TX. The duo was rocking their performance, until Timberlake "accidentally" ripped Jackson's top, exposing her nipple for the entire world to see. Of course, people freaked out at the horrifying sight of a woman's natural body (am I rolling my eyes dramatically enough for you guys to hear?), and Jackson ended up having to film a public apology video over the incident as Rolling Stone reported, even though Timberlake was the one who did the actual shirt tearing. To this day, rumors circulate about the event, with media outlets like USA Today speculating Jackson planned the event in advance.

Regardless of the scandal's infamy, the NFL has suddenly decided to be super chill about nipples in 2019, because Maroon 5 frontman Adam Levine had much more than a nip-slip at the 2019 Super Bowl, and it was clearly planned in advance for him to bare his chest. Levine systematically removed layers of jackets and shirts during his band's performance (I think he took off two different jackets, actually), throwing layers at lucky crowd members until he was fully topless in Mercedes-Benz Stadium by the time he was done crooning Maroon 5's famous songs.

Twitter users were quick to jump on the irony of Levine's Super Bowl antics, pointing out how hypocritical it was for the NFL to support a clearly planned performance that heavily featured nudity while Jackson's accidental exposure led the organization to vilify her for years.

Their anger makes sense, especially because Jackson's exposure was said to be accidental and Levine's was obviously intentional. Her fans were similarly angry at the NFL in 2018, when Justin Timberlake got to perform during the halftime show. Rumors swirled that the "Rock Your Body" singers had both been "banned" from the Super Bowl because of nipplegate, according to Billboard, but the ban apparently only still applies to Jackson.

Bottom line: the only differentiating factor between Jackson and her counterparts in both of these situations is that she is a woman and has female body parts. The female chest is still seen as something scandalous by many Americans — just look at the attitudes people have about public breastfeeding — despite how normal breasts are, and the NFL perpetuates their sexualization through its double standards in regards to nudity. But it isn't just an NFL problem; breasts are constantly sexualized in ways that male nipples aren't, and even when men's chests have a sexual tone (like Levine's did in his performance), they're celebrated and encouraged. Sure, you could argue that it's been a while and maybe the slip wouldn't be as big of a deal today. But you can't deny that if Jackson had been one of her brothers, there never even would have been a scandal at all.