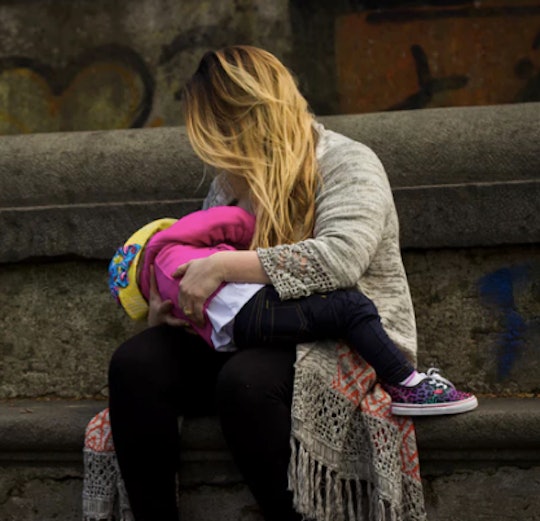 Sometimes it feels like it was only yesterday that I brought home my eldest daughter. I can still remember when the nurse laid her on my chest, the first moment when I felt her little heartbeat against mine. It was instant love, and it hit me like an explosion. The nurse helped me get her to latch to my breast, and even though I wasn't sure I was doing it right, I already loved the idea that I could be the one to nourish her, completely and totally. The way her warm cheek rested against me, and her little hand curled on my chest — I'd never, ever felt a love so strong as when I gazed down at my baby girl breastfeeding.

In the beginning, everyone approved of my decision to breastfeed her. I had support from friends, family, even coworkers. At the time, my goal was to make it to at least a year, but after a few months and a lot of research, I realized I wanted to breastfeed my daughter until she was at least 2 years old, which was the recommendation from the World Health Organization (WHO). But over time, and the older my daughter became, the more the support changed from encouraging to snide commentary and sarcastic jokes. My daughter is older than 2 years old now, but I am still constantly judged for extended breastfeeding my 3 year old.

He'll sarcastically tell me, "She's going to go to college with a boob in her mouth."

I've been asked too many times to count now that she's 3 and still breastfeeding, "Are you going to breastfeed her until college?" I'm always expected to laugh and shrug it off, but I'm not sure which irritates me more about that question: the fact that it is so rude, or the fact that it has been so overly used in recent years to underhandedly shame me as a breastfeeding mother that there is nothing intelligent or funny about it.

This comment, of course, sounds different depending on who says it. It's always meant to be funny when a friend or acquaintance says it, but it takes on a different shape and tone when say, my husband says it, and always hurts the most when it comes from him. He'll sarcastically tell me, "She's going to go to college with a boob in her mouth," when our daughter is having one of her more emotionally charged tantrums and only some cuddle time and mom's boobs will calm her down. I know that deep down he supports my decision to continue to breastfeed her, but I'm not sure he understands it fully, and honestly, I don't expect him to.

As my big girl has aged and changed, her need for breastfeeding has changed too. From being her only nutritional source, now she sees breastfeeding as a source of comfort, peace, and calm in addition to nutrition and immune support. Some may think she doesn't "need" to breastfeed anymore because she's 3, as if being 3 years old somehow diminishes the worth of breast milk and of our breastfeeding relationship. I've come to learn that many in our western society also don't understand that globally, the average weaning age isn't even until 4 or 5, according to La Leche League.

Instead of laughing it off, my response to "Are you going to breastfeed her off to college?" is, "I might. Is that OK with you?"

But try as I might to be armed with my convictions, beliefs, and motherly instincts, my heart is still susceptible to the stinging judgments of others, especially when it comes from those who once supported me on this journey. Somehow, it's expected that I should be the one to show grace in these situations, but how can that be? I am my daughter's mother, I am the one with the knowledge on how best her father and I want to raise her, and I know I can't expect everyone to know and understand what I'm doing is 100 percent normal. But even so, ignorance is not an excuse to judge. Instead of smiling and half-laughing at the comments people make about my choice to extended breastfeed my daughter, I wish I could just scream, mind your own business! Why is our choice to self-wean when my daughter is ready something you think you can joke about?

I've now gotten to a point that instead of laughing it off, my response to "Are you going to breastfeed her until college?" is, "I might. Is that OK with you?" Because seriously, do I need anyone's f*cking permission to do so? This usually catches people off guard and they tend to backtrack with, "Hey! Whatever! You're the mom." And yes, yes I am. So please don't call me out for doing something that myself and millions of other mothers have chosen to do throughout history just because it's deemed as weird by our "advanced" society. Please don't call into question my choices as a mother — especially a choice that has absolutely nothing to do with you.

I'll get through this, and I know that I will, because as it turns out, the joke isn't on me, it's on the people who ask the stupid questions. But this knowledge doesn't make it any easier. Even if some of my supporters are no longer on my side, I know that science is. I am also 100 percent confident in my decision to extended breastfeed and have been doing it for so long now that I no longer rely on everyone's support to get through this. I don't need other people to validate my parenting decisions, especially this one, because when I look at my little girl breastfeeding in the comfort of her mother's arms, finding rest and peace in the storm of being a three-nager, I already know I've made the right decision. And that, for me, is more than enough.