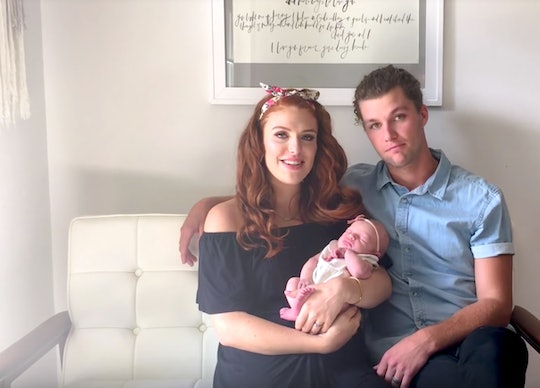 People Shamed Audrey Roloff For Wearing *This* To A Doctor's Appointment

By now, the stars of TLC reality show, Little People, Big World, are probably used to the criticism from viewers all over the world. By putting their lives on camera, the members of the Roloff family are used to being criticized by some for their actions. But sometimes the shame is uncalled for, especially when it is over the smallest of things. Audrey Roloff, wife of Jeremy Roloff, and star of Little People. Big World, is probably used to being shamed by now, especially as a new mom. But this might be the most ridiculous piece of criticism she has received yet. Seriously, people shamed Audrey for wearing ripped jeans to a doctor's appointment and it is absolutely ridiculous.

Of all the things to shame a new mom for, the last thing should be for the way they choose to dress themselves. New moms are tired, stressed out, and more concerned about their child and getting them to their doctor's appointment than they are about their own appearances. Picking up a pair of clean pants and a shirt that doesn't have spit up on it is an after thought.

So it doesn't make sense that someone would shame Audrey for her pants. On Wednesday, Audrey shared a photo of herself with her daughter, Ember, after her two month check up at her doctor's office. But instead of remarking on how adorable Ember looked, one person chose to comment on Audrey's pants. Yep, her ripped jeans.

The top comment on the Facebook post asks, "Why would you wear those jeans to a doctor's appointment?" And several other people have chimed in, agreeing with that statement. "That's the style, those jeans?," another commenter asked. But for every negative comment about Audrey's jeans, there are ten times as many positive comments, defending Audrey and her style, and commenting on how cute Ember is. Their support is absolutely awesome and shows that there is some good in the world.

Audrey herself noticed the hate. According to Us Weekly, Audrey took to her Instagram account on Thursday where she posted to her Instagram story and pointed out the fact that she was being shamed. "I posted this pic of Ember and I on my Facebook page...," Audrey wrote, sharing a screenshot of a comment shaming her for her jeans, according to Us Weekly. "And this was the top comment LOL."

It is great that Audrey can keep and maintain a sense of humor about these things, especially when people are so quick to criticize her for little things. In order for someone's life to be that out in the open, their skin must be pretty thick.

But if you got shamed for as much as Audrey does, your skin would be pretty thick, too. It seems as if there people are finding something new, every single day, to shame her for. Before Ember was born, people criticized Audrey for how much she exposed her bump on the internet, according to Us Weekly. And since Ember's arrival, the critics have not stopped commenting. In October, people took to Instagram to tell Audrey that they were not happy with Ember's outfit, according to the Hollywood Gossip (according to some commenters, her leggings were not a good look). And just last week, Roloff got shamed for posting a photo of her daughter covered in packs of baby wipes, according to In Touch Weekly. It is exhausting just thinking about the daily criticism that she has to endure.

It is important to remember that Audrey is only 25 years old and is a first time parent, figuring everything out as she goes. Judging people for what they wear to their child's doctors appointment, especially a mom to a newborn, isn't right.