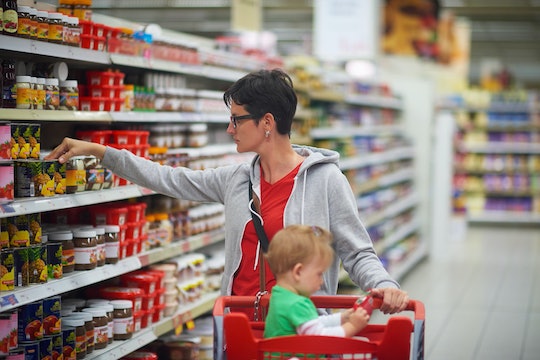 People Shamed This Mom For Feeding Her Daughter A PB&J In A Store, & It's Absurd

Just when you thought mom-shaming couldn't get any more ridiculous, this mom was shamed for feeding her daughter a PB&J sandwich in Target. And when the mom went to vent about the supposed incident on a parenting forum, she was further condemned for her actions. So, why are people lashing out? Apparently, many commenters think the mom endangered other kids at the store who might have a peanut allergy, while some people criticized her for supposedly being unsanitary. A few supporters, however, believe the situation is being blown out of proportion. Although it might be difficult to fathom how it's possible for a peanut butter and jelly sandwich to cause so much drama, one thing is for certain: parents are fired up about this topic.

Parenting forums, as helpful as they may be to some people, can also be a dangerous place for parents. Case in point: When this mom went to complain about a stranger lecturing her on the dangers of peanut allergies, she received a lot of hate in response. "Has it become unacceptable to eat peanut butter in public?" the mom initially asked fellow commenters on Monday via Urban Baby, an anonymous forum for New York-based moms. "DD was eating a pb&j at a store today, and a woman stopped me to lecture me about peanut allergies."

The first response to the mom's question was inquisitive. "What store? How the f--k did she know?" a commenter asked, according to Urban Baby.

"It was Target," the parent replied. "Do you mean how did she know what dd was eating? I guess she saw the sandwich or smelled it? DD was riding in the shopping cart."

Unfortunately, all hell broke loose when the mom confirmed that her daughter ate the forbidden sandwich in the Target shopping cart. The horror.

"You feed your child in a Target shopping cart?" one commenter railed, according to Yahoo Finance. "That is disgusting! Your problem is much bigger than the peanut butter!"

Another person chimed in: "I’m from Boston and I would throw some serious side eye at anyone feeding their kid a sandwich in a shopping cart. Nasty."

Of course, the mom felt compelled to defend herself against the hate. "You ladies crack me up...you never fed your child anything while on the go?"

"I have never in a nasty shopping cart," a commenter replied. "And you probably shouldn’t put peanuts on shopping carts Come on. Your own stroller? Sure."

Alas, the mom's reasoning didn't quiet all the naysayers, and others went on to question her character.

One person wrote, according to the San Francisco Chronicle:

Your total disdain for the safety of other kids is awful. Feeding your kid a PB&J in a Target shopping cart is the epitome of low brow. For the love of God at least feed her in the car if you absolutely can't feed her at home! Everything about your post is vile.

Another upset parent penned, according to the Seattle Post-Intelligencer:

You're the worst kind of person. Just understand that raising a child with an I don't care about others attitude means they will be obnoxious insufferable kids just like their mom. A grown up would tell their kids we can't eat that right now because it may cause another child to get sick. Period. Why do we need to explain this to you?

For those of you are a bit taken aback by the backlash (it's a lot), you're not alone.

One parent argued that it isn't the mom's responsibility to account for another child's allergies, writing, according to Urban Baby:

I don't think you did anything wrong (outside of seeking comment via social media from a public that enjoys brutalizing people in an anonymous forum.) My son has life threatening tree nut allergies. I do not expect the rest of the world to change to accommodate him. Just because he can't eat tree nuts, doesn't mean people who can should only enjoy them in the privacy of their home vehicle, etc. As a parent, I have taught my son to be able to identify the nuts he is allergic to, to read food labels and to ask questions about food preparation/ingredients before eating items in restaurants, at school or at homes other than mine. We both carry Epi Pens and we wipe down public items (shopping cart handles, etc.) before he touches them to avoid a potential allergic reaction.

Another person pointed out that a parent has the right to feed their kid whenever, wherever.

The supporter stated, according to Urban Baby:

Since when do kids not eat anywhere they are. A church pew, a grocery store, wherever and whenever. They eat baby snacks and cheerios at any given time. Don't all parents make sure to have snacks available at all times to appease their children while out and about? Crazy to vilify her for letting her child eat! If someone was complaining about a woman breastfeeding in the middle of the store all of you hypocrites would be all over that person too - you just thrive on being hateful and nasty. If a parent has a child with allergies to anything it's that parents responsibility to ensure their own child's safety - you can't expect the general public to cater to your child's needs.

And the mom's defenders bring up some good points here. Although food allergies should be taken very seriously, this mom didn't endanger any lives at Target by feeding her kid a PB&J sandwich. In fact, it's highly unlikely that someone would suffer an adverse reaction from touching peanut butter. "Touching peanuts would be highly unlikely to produce an anaphylactic event in a patient with peanut allergy," an expert wrote on the American Academy of Allergy, Asthma, and Immunology's website. Furthermore, the mom wiped down the cart after her daughter was finished eating.

Secondly, I bet a lot of parents would agree that there's nothing unsanitary about a child eating in a shopping cart. Kids eat in a variety of places — and put a lot of dirty objects in their mouths — and there's nothing wrong with a parent giving their kid a snack in a public setting.

Either way, there's a good chance this controversial debate will continue to rage on in the days to come. C'est la vie.